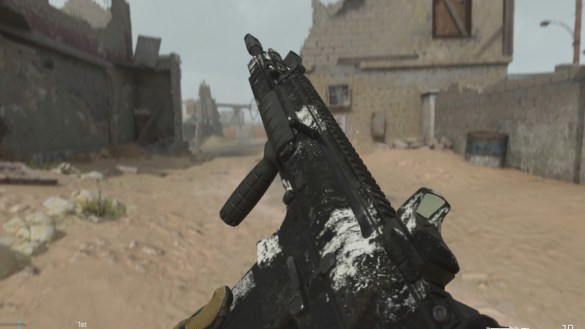 There are three weapons in the Tactique Verte platform, and of that gun set, the TAQ-M certainly hits the hardest. This weapon is a marksman rifle with one-shot to the head elimination potential and just two shots to the body at nearly any range in Modern Warfare 2.

But in return for so much damage potential across the board, the TAQ-M can feel much harder to use than other weapons in the platform like the TAQ-56. Recoil and speed are two of the main issues on this rifle and we aim to fix those. Our loadout guide will give you all the information needed for success in the Modern Warfare 2 multiplayer.

Each shot taken on the TAQ-M is going to have some noticeable kick. Unless you’re hitting a headshot every time you shoot, that kick becomes a problem. We want to make the recoil pattern as tight as possible while retaining ADS speed. Below you can find all the attachments.

On this build, we’re going to bypass a barrel and move right to the Sakin Tread-40 Muzzle. Vertical and horizontal recoil is boosted on the Sakin, which are must-have stats for many marksman rifles. Add the VX Pineapple underbarrel to the mix for even more control. With both of these attachments, shots will feel much easier to land in succession.

Next, we want to add 6.5mm High Velocity ammunition to the TAQ-M in Modern Warfare 2. These rounds give a major boost to bullet velocity, but tuning the attachment brings it up a notch. Make sure to push the tuning settings to max damage range and max bullet velocity.

The last two attachments are the TV Xline Pro stock and the Cronen Mini Pro. An optic is subjective, and though the Cronen is always a fantastic pick, it’s really up to you. The TV Xline on the other hand is integral to retaining ADS speed on the TAQ. Without it, you’ll feel far too slow for MW2.