The Battle Rifle variant of the Scar. 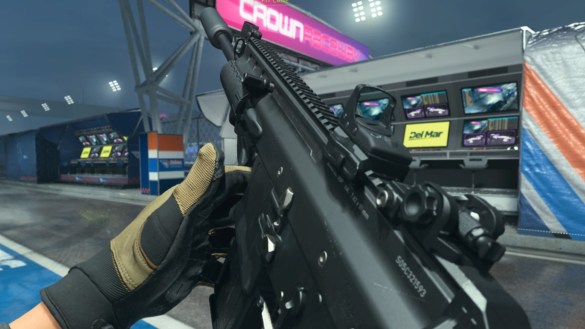 Players are learning quickly that the battle rifle class is one of the deadliest options in Modern Warfare 2 and the TAQ-V is one of the best for overall versatility. This heavy version of the Scar can be used well in full auto or semi-automatic modes depending on how you build the weapon.

Every battle rifle in the game has the ability to one-shot enemies in the head when in semi-automatic mode. In full auto, they can act like a normal AR with more recoil to worry about. In this loadout guide for the TAQ-V, we’ll go over the best ways to use the weapon and the attachments you need.

When you put this build together, you’ll notice it’s incredibly similar to the standard TAQ-56 loadout with minor changes. In essence, the “V” version of the TAQ is a slower but deadlier version of the 56 so it should be treated that way. Every attachment you need is listed below.

The first attachment on the list is the 18″ Precision-6 Barrel. This is an easy choice for the damage range and bullet velocity that is added to the weapon. There is also some hip-fire accuracy, but that’s not as important. But there is no recoil control added, so we need to do that ourselves.

For the recoil control, we have the Sakin Tread-40 muzzle and the VX Pineapple underbarrel. Both of these have a ton of vertical recoil control which is the main issue with the TAQ-V when compared to the 56. Using a suppressor and an FTAC Ripper is also an option but you’ll lose the control we’re looking for.

The last two attachments are the Demo Cleanshot Grip and the Cronen Mini Pro optic. Using the Demo grip will help with some of the ADS speed on the weapon while the Cronen is simply for better precision in Modern Warfare 2.

And that’s all. For more on Call of Duty, head over to our dedicated Modern Warfare 2 section full of guides, news, updates, and more.