Can you tell I adore Collei? 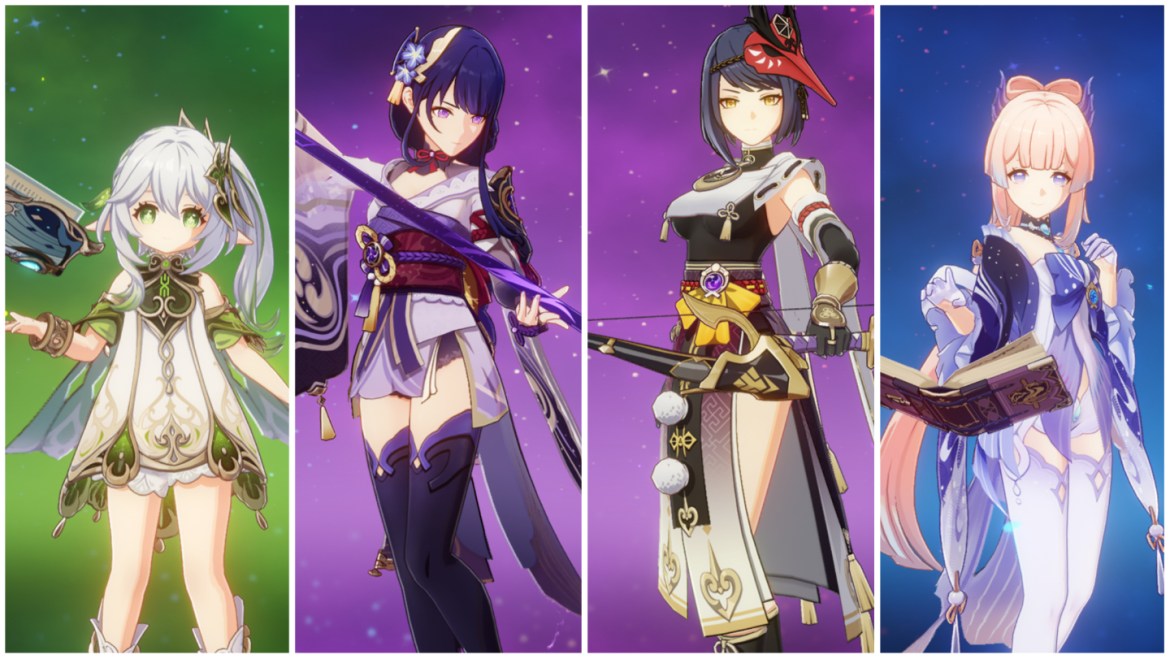 If you haven’t heard it before from some other guide or YouTuber, then you’re going to hear it from us: Nahida was the last piece of the puzzle we needed for a high amount of Dendro application!

Unless you were blessed with Tighnari on his banner or you lost the 50/50 after the 3.1 update, then you’ve been skirting by with us and the Traveler’s Dendro Burst once it Aggravates with Electro. Because there was no way you could get enough Dendro Application to do nearly enough with one of the most hyped team compositions the Genshin Community has been looking forward to.

Yup, we’ll start right off with it. It’s Bloom, an insane combination of elements that summon tons of Dendro Cores by combining Dendro with Hydro. These Dendro cores will explode after some time and depending on how many Hydro attacks come into contact with Dendro application, you can have several on the field. With Anemo, Hydro, and Nahida in the team, bloom can become an explosion of Dendro explosions, especially with Nahida’s skill that attacks enemies whenever an elemental reaction occurs.

The main trick to figuring out Bloom and how to utilize it is remembering that only around five Dendro Cores can exist on the field and once the six spawns, they will begin to explode. So triggering a high amount of Dendro Cores to take the field requires a lot of Dendro application with Hydro application to create explosions of Dendro and Elemental Mastery thanks to Nahida’s additional attack. Using Venti to gather the enemies, Nahida to track them with Dendro damage, Nilou to apply Hydro constantly, you can either attack with Nahida, Nilou, or Barbara to constantly spawn more Dendro Cores to explode onto the field.

Anemo is important to the team comp because you’re going to need to constantly swirl Hydro so you can attack enemies with Dendro to spawn Cores that will continue to explode. To do a lot of damage by spawning many cores, you’re going to need a character that does a lot of Hydro application which is going to be another Hydro mage such as Barbara or Kokomi. Nilou is also a great option since she will also spawn Bountiful Cores, a special passive to her where triggering Dendro Cores causes them to spawn larger and explode faster.

Before you laugh, hear me out. Any excuse to bring Thoma back into some team comps is a great one and with the addition of Dendro, Thoma becomes a Burning and Burgeon king. Because Thoma’s Burst is actually quite useful for the fact that it is slow, it allows plenty of time for you to build up plenty of Dendro Cores to the field for him to sweep them and enemies alike.

You can set up Burning for enemies to build up Thoma’s Burst or use Nahida to target enemies with her skill. Xingqui is a great Hydro Applicator along with Yelan, so using them to constantly bring up Dendro Cores to the field is a great way to then either switch to Thoma’s Skill or wait for his Burst to sweep them off the field and cause an explosion of Burgeon and Burning altogether on the enemies.

One of the most gratifying experiences with Dendro is watching the vast amounts of Electro damage that can occur alongside Dendro. And because there are many Electro people to choose from to work in this team comp, we’re going to go along with an overlooked healer, Kuki Shinobu. While a pretty average healer she may be, Kuki’s Elemental Mastery gimmick plays right into Nahida’s, working well on top of the Aggravate and Quicken damage especially if her HP is below 50 percent.

Kuki’s Skill snaps a ring of Electro to pulsate around her, attacking enemies and healing the player on the field. Using Nahida to track the enemies for her Tri-Karma Purification and an Anemo character to round them up in closer proximity, you can use Kuki’s Burst to bring down a hail of lighting that has a longer duration whenever her HP is below half.

Another fun little snippet you might want to try is Team Sniper. You heard me right. If you have the roster, give this comp a little spin. Sara can increase attack in a certain AOE by using her Skill (and shooting a small area if you don’t have her past C2), using Raiden’s Skill to trigger Electro damage whenever a character attacks, then you can switch to Nahida’s panorama and target enemies with a quick Dendro attack, Electro damage from Raiden, and then another attack from Nahida due to her Tri-Karma Purification.

What team compositions have you been trying with Nahida? Let us know!