All Ishtar Abilities and Ultimate in SMITE - Prima Games
Tips

All Ishtar Abilities and Ultimate in SMITE

New SMITE Hunter is out! 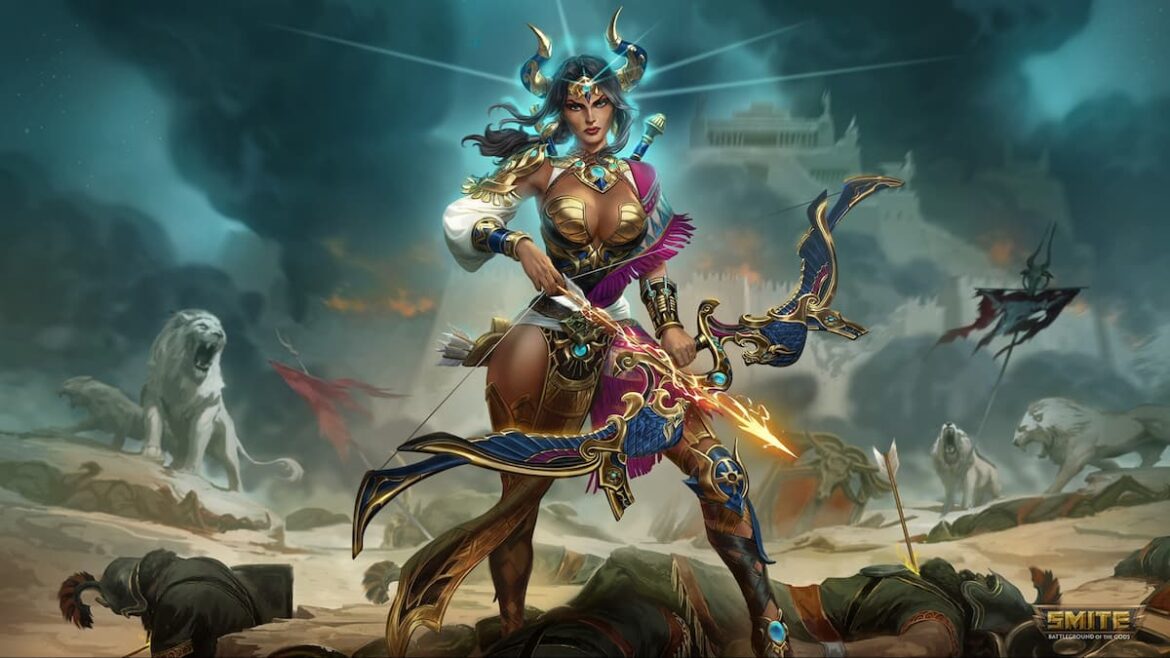 Ishtar is the new Huntress in SMITE, and she has quite an interesting kit with a lot of Crowd Control and damage abilities. Her lore is quite interesting and very close to the lore of Gilgamesh (they are big rivals!), but more on that some other time – we at Prima Games know that you want to learn more about her abilities ASAP!

Her Basic attack is quite simple. Ishtar fires arrows with her bow which are a combination of light, fire, and holy energy of Heaven.

Any time you get below 75%, the enemy God that hit you most recently will have a big star above them (they will be marked). You get increased attack speed against the target any time you hit the God (it is stackable, and if you do manage to kill the marked God during the debuff duration, you will also get an additional movement speed buff).

Spread Shot (Sub-ability). Fires 5 shots in front of Ishtar (center one will do full damage, while the rest will do reduced damage). Item procs will also happen only on the center arrow. Side arrows will do 5/6.25/7.5/8.75/10 of your Basic Attack Damage.

Storm Shot (Sub-ability): Fires a couple of lined shots one after another (similar to Hachiman’s ability). It enhances her attack speed by 20/25/30/35/40%, projectile speed is 120% and damage reduction for these shots is 20%.

Calls four strikes of lightning in front of her that can go either towards or away from her. If you hit an enemy God twice with this ability, they are Mesmerized for 0.75 seconds. You will notice that there are four circles in front of her before you cast the ability (it looks like the Audi car brand logo). It seems like it’s a great ability to chase enemies or prepare to fight against the enemy rushing at you. If you are aiming close to yourself, the circle closest to you will be the first that’s hit by lightning and vice versa.

Dashes and does damage, with a conditional backflip if you hit an enemy God. You will see a circle around the enemy God before you cast your spell if you are in range to complete the backflip. This dash seems really long and might be nerfed at some point. This dash roots the enemy God that was hit, for one second. This dash can also crit and perform the item proc effects.

Five swords of light will be shot in a cone in front of Ishtar, and they will form a sort of a “wall” when they reach their maximum length (which is quite considerable, realistically speaking). Swords cripple the enemy Gods that are hit by them for 1.25 seconds and deal some damage (if an enemy God is hit by more than one, they will take less damage from any subsequent hits).
Ishtar is immune to crowd control during this ultimate.

When you press the ability again, the swords are called back to Ishtar. During their journey back towards Ishtar, if they hit an enemy God that is currently crippled with this Ultimate ability, that second strike will apply a Stun to them that lasts one second.

We hope you’ve enjoyed this preview and we also hope you will enjoy playing Ishtar!