Sorry if this hits too close to home. 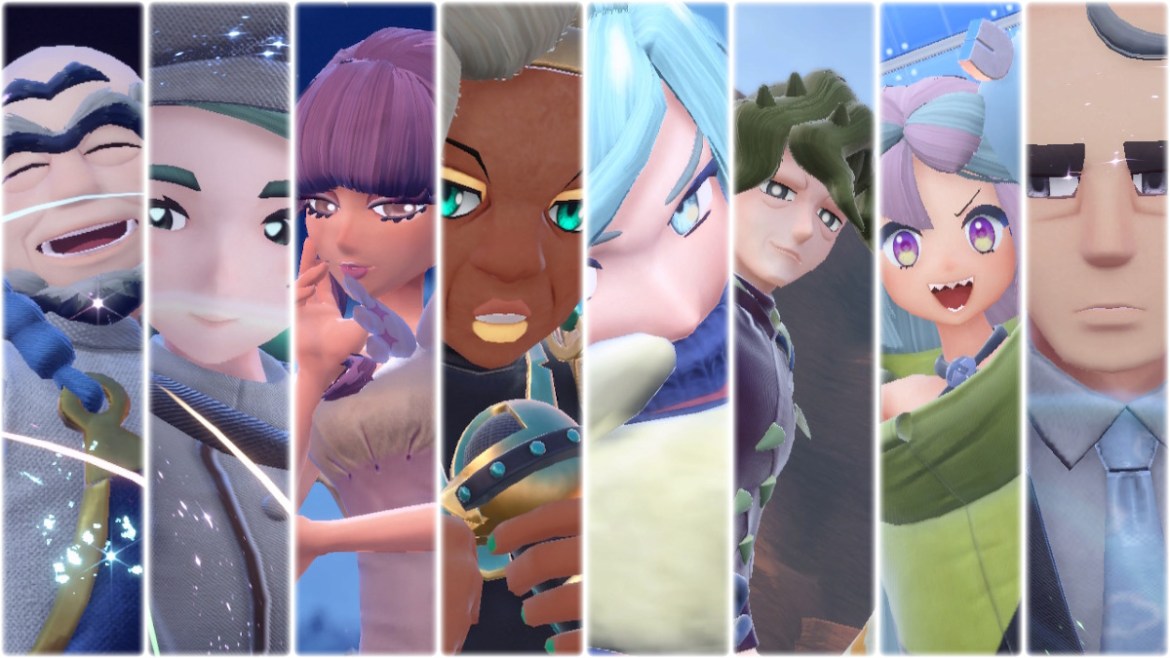 I’m just gonna be completely honest from the start – Pokemon Scarlet and Violet is the first Pokemon game I’ve played since Red and Blue. Not only that, but I’ve mashed my A button throughout pretty much all of the game’s dialogue, especially during the whole Gym process. You get to the Gym, Nemona’s usually waiting there to interrupt you, you talk to the clerk and receive instructions for the Gym Test, you play a Pokemon-themed game of “Where’s Waldo?”, and then you finally get to fight the leader.. but then you’ve got even more dialogue before, during, and after the fight. It’s a lot to read and I just want my badge, please. What I mean is, in just about every aspect possible, I’m the absolute worst person to write this article. However, I took some nifty screenshots of each Gym Leader and I wanted an excuse to use them, so you’re just going to have to deal with it.

If the Gym Leaders in Pokemon Scarlet and Violet were real people, here’s how I think they’d act.

Gym Leaders in Pokemon Scarlet and Violet, but IRL

Here’s each Gym Leader in Pokemon Scarlet and Violet and what I think they’d be like in real life, in no particular order or ranking, but purely based on which thumbnail I click first in my pictures folder.

Kofu seems like a fun-loving, albeit forgetful kind of guy. He’d probably be that uncle that lets you have a secret sip of his beer at Thanksgiving behind your parents’ back. Mom can’t stand him, as his clumsiness always leads to at least one of her prized dishes being broken every time he visits, but he’s undoubtedly your favorite person in your extended family. His presence in a room is as loud as his chuckle, and he gives the best hugs.

If the Real Housewives of Paldea was a thing, Tulip would surely be the star of the show, though I don’t think she’d ever actually be married – her exorbitant amount of affluence and independence means that no partner could possibly meet her standards worth settling down for. I mean, she already owns her own make-up brand, no doubt being used by every A-list celebrity under the sun, and she probably sells those 50 million dollar homes on Netflix’s Selling Sunset when she’s bored. For the everyday person, a taste of extreme fame and wealth may be a pipe dream, but for Tulip, it’s a Tuesday.

Larry would rather be anywhere but here. See, Larry owes a lot of money to some not-so-admirable loan sharks after a huge gamble on the Kentucky Derby went very, very wrong. It was all lined up perfectly – he had the inside scoop that Mister Frisky would surely win the race with the help of some “special juice”, and his bookie hooked him up with some rather questionable investors to join in on the pot. It would’ve been the biggest payout in history had Mister Frisky not slipped and tumbled his way into last place. Now, though he despises it, Larry battles other trainers to earn a little extra cash after he gets off work from his day job in accounting. Don’t gamble, kids, or you may end up like Larry.

Ryme couldn’t have a more appropriate name, being the hippest Gym Leader in Paldea and, possibly, the entire world of Pokemon. In real life, Ryme would definitely be your favorite rapper’s favorite rapper. She’d probably get her start in a musical collective before embarking on a much more successful solo career, where she’d forever be regarded as a legend of the craft, much like Beyoncé or Justin Timberlake but way, way cooler. Ryme’s more like a Lauryn Hill, if we’re being honest. Since it’s 2022, it’s probably about time for a reunion tour with her former group members, which will obviously sell out entire stadiums across the globe.

Katy seems more like the introverted, quiet type. Since she’s the bug-type leader, there’s no doubt that she’s one of those people that has a room in their house strictly dedicated to all the reptiles, amphibians, and insects she keeps as pets. Her walls are lined with aquariums of all sizes, and each one of her eight snakes are named after characters from Shakespeare, as she’s a huge fan of English literature. When she’s not buried in a new novel on a rainy day, she likes bird-watching outside of her window. Katy really likes animals of all types, and gets sad when she sees someone kill a spider.

On the other side of the spectrum is Iono, the extroverted influencer/streamer/superstar. Iono would obviously be a huge gamer, and would regularly get sponsorship deals from gaming’s most notable brands. Her room would be filled with assorted flavors of G Fuel that she never intends on actually drinking, but you could definitely use promo code ‘IONO’ for a sweet discount on your own batch. If Iono were real, you’d probably be one of her tier-3 subs. Personally, I would never be one, ’cause I’m not lame. Haha, no way, man. Not me. Uh.. yeah, anyway.

Grusha’s probably the kind of person who’s good at everything, but is too modest to ever really mention all their accomplishments. He really doesn’t like being the center of attention, which is partly why he chose snowboarding as a hobby, as it allowed him to cover up and hide his face, offering a sense of anonymity while he owned the slopes. He didn’t really expect to go pro, but no one in Paldea even came close to matching his natural ability. Which explains why he’s a former professional, as competing in tournaments isn’t exactly the best way to avoid the spotlight. Nowadays, Grusha probably teaches kids how to snowboard and ski like their favorite stars.

Brassius is that dude who shows up to your house party and criticizes your vinyl collection, but only after criticizing your lack of a professional audio setup to truly appreciate said collection. You don’t exactly know who he knows at the party, nor how he found out about it, but you’re sure that he’s actively killing the vibe. Everyone knew that there’d be free beer at the party, but Brassius made sure to bring his own bottle of Merlot, as he considers himself far too sophisticated to allow such a primitive beverage to grace his lips. He imports all his clothing from small, European villages that you’ve probably never heard of. You definitely know a Brassius in real life, and now you’ll never look at the Gym Leader without thinking of them.