Is Forspoken Dialogue Really That Bad?

You ever been isekai'd, son? 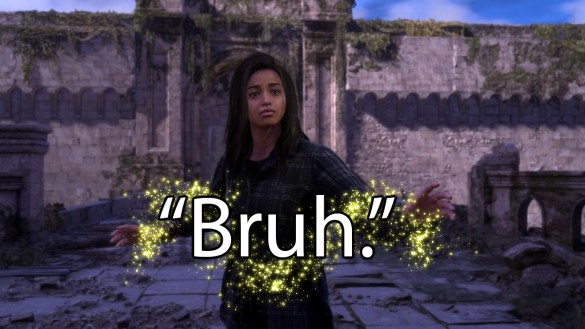 If you’ve been on any type of social media gaming spheres recently, you may have already made up your mind that Forspoken, Luminous Productions’ new action RPG, is one of the most poorly-written pieces of media since, I don’t know, season eight of Game of Thrones. At least, that’s what countless critics in the gaming space would have you believe, lambasting the protagonist’s dialogue as an over-the-top, cringe-inducing mess after a select few clips of the game began circulating around Twitter. Is Forspoken’s dialogue really that bad, or are we witnessing confirmation bias in full effect?

I Just Wrote This With My Freaking Mind

We’ve all seen the infamous clip shared by user @NintenDaan on Twitter – what started as an innocent summary of the first four hours of gameplay was quickly viewed and retweeted by thousands, mainly to dunk on the reaction Frey Holland has when discovering her magical powers.

Is it campy as hell? Sure.

Did it go on for a little longer than needed? Perhaps.

Is it any worse than your average Marvel movie? Dialogue from Uncharted? Strangers of Paradise? Not really.

Frey’s a 20-year-old New Yorker who’s been transported to a magical world full of dragons and castles and magical spells. I don’t know; I’d be pretty stoked if I were in her shoes. I feel like you’d be, too. Sure, it’s a bit theatrical, but this is also a video game we’re talking about, and Forspoken sets a pretty cinematic tone right from the beginning. The music swells during the emotional introduction as Frey weeps next to her cat in an abandoned apartment, and melodies playfully bounce around during more light-hearted scenes. Forspoken is clearly a journey that doesn’t take itself too seriously.

I Turned Myself Into a Cuff, Frey

While it may seem that the entire internet has collectively agreed upon Forspoken’s unforgiveable dialogue, allow me to remind you to take it all with a grain of salt. After all, some of the people criticizing the game’s writing are the same who’ve praised High On Life as a comedic marvel. And these are critics with impressively large audiences, mind you. That’s not to say that Justin Roiland’s writing style is awful, nor is it to say that said critics are wrong for enjoying it. Rather, everyone’s tastes are different, and sometimes the internet’s most recent dogpiling efforts, frankly, shouldn’t mean shit.

Yeah, Forspoken has some goofy exchanges. It also has pretty funny ones, too.

Forspoken isn’t a perfect game – it falls short in plenty of areas, as Prima’s Jesse Vitelli outlines in his detailed review of it. The combat isn’t as fleshed out as we hoped for, the plotline is underwhelming, the world of Athia is pretty bland. But the dialogue is nowhere near the weakest aspect, so we should all agree to stop pretending it is. The internet has been wrong plenty of times, and no matter how persuasive the collective gaming sphere may be, it’s always better to jump in and find out for yourself. Rent it on GameFly, watch a Let’s Play, download the free demo, I don’t know, just form your own opinion. I did – and I’m enjoying Forspoken quite a bit because of it.

For more information on Forspoken, check out our other guides here at Prima Games.