Who doesn't want to take down a secret boss? 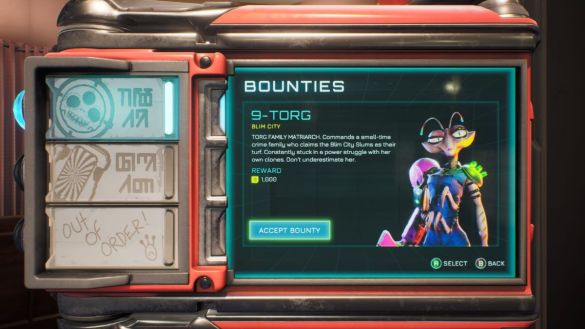 High on Life has been released, and players will be immersed in an alien universe full of fast-quipping and distinctly suicidal aliens and chatty weapons. This game prompts you to do the most misanthropic, ridiculous nonsense, going against the usual game logic. One of these moments occurs after you’ve obtained your bounty suit and you’re sent off to kill 9-Torg, an evil ant clone who runs the slums of Blim City.

Navigating the slums is a fairly laid-back tutorial to defeat all of her ant minions and arrive at 9-Torg’s lair, where she’ll be threatening another clone, 5-Torg, with a gun. 5-Torg is the next potential mob boss of the slums, but that’s only if 9-Torg doesn’t kill her first.

Defeating 9-Torg is essentially a culmination of all the basic skills you’ve learned in the slums. But once you’ve put her down, you’ll find 5-Torg in front of you. Still trussed up and hanging from a rope like an ant pinata. You might be tempted to try to shoot or knife her down. This isn’t an option.

Related: How to Get Don’t Knife the Hand That Feeds Achievement in High On Life

What is an option is either leaving her as she is or killing her. Talking to her will prompt her to tell you that you’re an official honorary Torg now, 10-Torg in fact, and that you’ll always have a place here in the slums. But if you ask her what she’s going to do now that she’s in charge, she’ll admit that she’s still evil and will be doing a lot of crime.

That makes sense. The Torgs are all clones, after all. Why would one Torg’s rule be any different from one another?

If you choose to kill her, you’ll find that she also has a boss health bar, like 9-Torg. She’ll obviously be upset you’re shooting at her, but note that this is “Pretty spot on Torg behavior,” befitting of someone who has just been given the title of 10-Torg.

Killing her nets you no XP (there isn’t XP in the game), and Kenny will hesitatingly state, “Nice, we’ve killed another boss. I think? Like a bonus secret boss. Good work.”

There are no story consequences for doing this and no benefits beyond the voice lines. So, do whatever feels best.