My coworkers wanted me to write "Bird Shit" somewhere. Degenerates 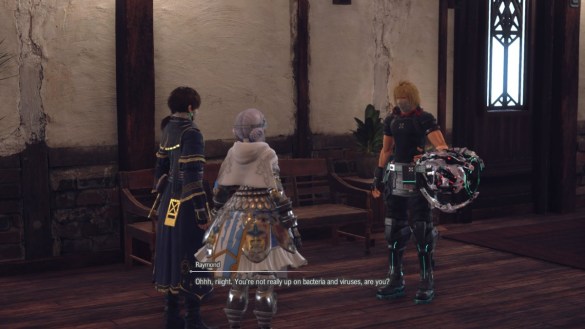 Folks, we are gathered here today to talk about bird excrement. Yes, as part of your adventure in the world of Aster IV looking for Raymond’s surviving crew and the stuff Laeticia and Albaird going on that I probably shouldn’t get into here, you’ll be pickin’ up bird stool. Of course, there’s a greater context to this mission. You aren’t just digging through trashcans for garbage and bodily fluids for your own entertainment. There’s a serious illness spreading in Rhythal and Elena has figured out a medical solution based on what’s available. But you have to do the dirty work. Here’s how to find all the bird dropping samples in Star Ocean The Divine Force.

So the thing about these, and the reason I’m writing this guide really, is that it’s pretty hard to see a couple of these items because of where they are. So despite each sample having its own waypoint, it seemed like there could be a need for something like this. So here I am, with my day-one bird crap knowledge. How great for me.

The first sample takes you to a building near that big archway, and you won’t be able to see the nest from the ground. That’s because it’s right on the edge of the roof, too small to peek over the lip. You gotta zoop up there with D.U.M.A. and be careful not to just run back off the roof. They’re fairly steep in this city so watch your step.

The second sample seems like it’s going to be the same as the first for a hot second, as the waypoint once again points up at a building. But in this case, you won’t see the nest no matter what you do. Well, maybe you could get the camera to freak out at the right angle, but don’t worry about that, and just walk up to the tree. It’s on top of the tree. You’ll get the button prompt.

For the final bird dropping sample, you’ll need to jump off the edge of the world. No really, the waypoint takes you up to the edge of the ground, where only the videogames void exists. If you swing the camera around though you’ll see some rocky platforms big enough to hop down on. And if you get closer you’ll find a little cave where you get not only your final feces, but some foreshadowing for later.

Check out my Star Ocean The Divine Force review for more on the game, and be sure to keep an eye on the game’s tag while you’re spending time on Prima Games for more content.