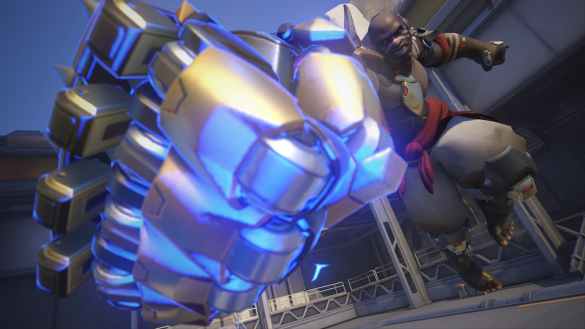 Doomfist, high council member of Talon and puncher of things, has received some noteworthy changes since the launch of Overwatch 2 on October 4. Switching from a Damage hero to a Tank, he now has increased health and shielding capabilities at the cost of overall damage output, though that’s nothing to scoff at. Doomfist will lead his team from the front lines; still dashing, smashing, and bashing his opponents into oblivion with undeniable force. Wanna learn how he’s been changed? Continue reading to learn Tips and Tricks for playing Doomfist in Overwatch 2.

Switching from a Damage hero to a Tank hero means tweaking some numbers, and Doomfist received a mix of buffs and nerfs as well as a slight change to his abilities.

Doomfist remains the punching powerhouse he was before, but with some extra defensive perks added on. All damage dealt with Doomfist’s abilities will create temporary personal health for extra survivability.

Doomfist leaps high into the air and smashes the ground, damaging and slowing anything caught in the blast. The leap behaves just like Winston’s, giving Doomfist great mobility and easy opportunities to jump behind enemy teams. Try jumping behind the enemy Supports and following up with a Rocket Punch, sending them soaring towards your team.

Doomfist’s new ability, Power Block, protects him and anyone behind him from frontal attacks for a short duration. If Doomfist blocks heavy damage, his next Rocket Punch is empowered. Use this to negate rockets, grenades, sniper shots, and even some Ultimates.

Rocket Punch remains one of Doomfist’s most powerful tools, able to launch him forward and knock opponents far away. Perfect for sending an enemy off the edge of the map for an instant elimination, or slamming them into a wall for increased damage. Use Rocket Punch for consistent damage and disrupting enemy positioning.

Come on and slam, and welcome to the jam. Meteor Strike launches Doomfist into the air and displays a large targeting circle on the ground that you can aim. Aim the inner circle as close to an opponent as possible and press the primary fire button to strike down, dealing devastating damage and slowing anyone that survives.

If this guide was helpful, make sure to check out our other guides on Overwatch 2 and more here at Prima Games.