Check out the new adjustments. 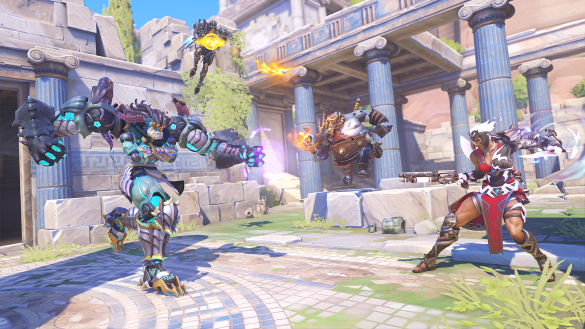 Overwatch 2 has received another round of battle adjustments and other bug fixes. This patch coincides with eh ewn battle for Olympus limited-time event. Let’s break down all of the patch notes for Overwatch 2 in January 2023.

First up, we have the new Battle for Olympus free for all mode allows eight players to go head-to-head with unique divine powers for seven different heroes.

Junker Queen’s adjustments seem to fall in line with making her abilities stand out without making her a tank that deals incredibly high damage, but rather someone who depends on her toolkit.

That’s all of the hero adjustments for this patch. Most of the major adjustments were pushed forward to the mid-December patch, and the Roadhog adjustments will be coming in late January according to Aaron Keller.

Some General Fixes were also put in the January patch. Nothing major, but some smoothing out of bugs and animations.

Nothing huge on this front, just some standard bug fixes for both of these maps.

If any of these bugs have been bothering you during matches, luckily they all seem to be addressed in this patch.

Well, that’s everything included in the Overwatch 2 January 2023 patch. Check out all of the earnable cosmetics in the Battle for Olympus event.