Is There a Shiny Noise Alert in Pokemon Scarlet and Violet? - Answered - Prima Games
Tips

Is There a Shiny Noise Alert in Pokemon Scarlet and Violet? – Answered 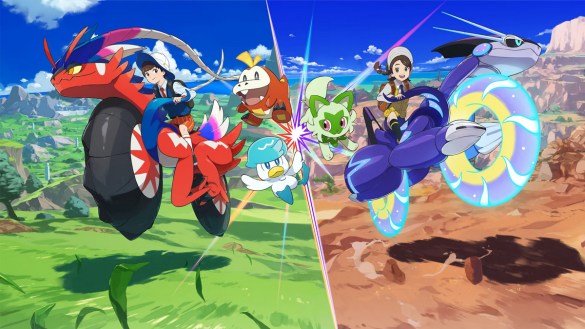 Pokemon Legends Arceus was the biggest leap from the franchise’s classic approaches to its titles by allowing players to freely roam in an open world and catch Pokemon in real-time. Along with this new way of experiencing battles, it was now possible to see Shiny Pokemon without needing to head into a battle. Additionally, there was also a special sound effect whenever a Shiny spawned near you. Heard the chiming sounds? Stop walking immediately and look for the oddly-colored Shiny Pokemon.

Does Pokemon Scarlet and Violet have a Shiny Noise Alert?

For no apparent reason, Game Greak removed that alerting sound from the game, so there’s no longer any audio indicative that a Shiny could be nearby. Additionally, Arceus also featured the Shiny sparkles in the overworld, immediately giving away whether that Pokemon was special or not. Those are also absent from Scarlet and Violet, so you need to discern by yourself if that Pokemon really has a different color or if you just need new glasses.

Related: What are the Wild Shiny Odds in Pokemon Scarlet and Violet? – Answered

But on the other side, there’s a new feature that helps avoid losing a Shiny to lack of attention. When using the Auto Battle function, your partner will not automatically attack any Shiny Pokemon so you can have your shot at getting them. A huge and necessary QoL change, especially if you’re taking on Mass Outbreaks where you’ll mindlessly face lots of Pokemon and might just lose a Shiny when spacing out.

And that’s it for the Shiny Noise Alerts in Pokemon Scarlet and Violet. There’s not a direct alarm per se, but the game isn’t dumb enough to make you lose those rare Pokemon by pure chance. Well, you still need to catch them, so it might still happen.