How to Obtain Creature in High On Life - Prima Games
Tips

How to Obtain Creature in High On Life 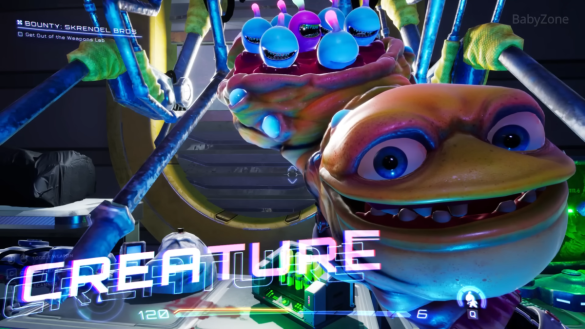 One of the best, and strangest parts, of the sci-fi comedy shooter High On Life is the weird weapons you’ll encounter and carry with you through the game. These weapons, called Gatlians, are sentient guns that offer witty banter, a diverse array of death-dealing bullets, and abilities that will help you traverse the planets you find yourself faced with in your search to kill all the head honchos of a drug cartel. But one weapon is particularly interesting: Creature.

Creature is a Gatlian that’s been experimented on by the G3, warping its personality and abilities. And yet, oddly, it’s one of the more pleasant guns to have chatting to you as you traverse Zephyr Paradise and one of the most fun to use.

Creature has the unique ability to shoot children instead of bullets. Yes, the odd little Pikmin-esque creatures are its children, and yes, Creature shoots them out of its trick hole where they promptly chase down any enemy in the vicinity, cling to them, and explode. It’s one of the best guns in the game.

But how can you get this ridiculous Gatlian for yourself?

How to Obtain Creature in High On Life

When you’ve defeated Krubis and Douglas, the first two of the G3 cartel bosses, you’ll have the opportunity to select a few new bounties. If you want Creature, select the Skrendel Bros Bounty, and you’ll be given a teleporter back to familiar territory: Zephyr Paradise.

The Skrendel Bros have taken things over since the fall of Kubris, and they’re a little more competent than the drill head was. You’ll need to use your jetpack to make your way over to Skrendel Labs, completing a few puzzles and blasting a few enemies along the way.

Once inside, you’ll quickly learn that humans aren’t just being made into drugs; they’re being experimented on. But from deeper in the facility, you can hear someone groaning with pain in the Weapon’s Locker. The door will be locked, but that’s alright. There’s a way inside.

Adjacent to the Weapon Locker is a ramp that goes into a cramped room. This room will offer a button that can open the Weapon Locker (but check the terminal, too – there will be information on a character that will help you unlock some of the Zephyr Paradise forums).

Head back down the ramp and enter the now-open Weapon Locker.

There will be a few dissected corpses, including the corpses of Gatlians, but at least one is still alive. Free it, and you’ll finally have Creature in your possession. It’s a really fun gun and will allow you to access new locations and collectibles you weren’t able to get before.