How to Find the Secret Movie Theater in High on Life

Is this worth the three Warp Crystals? It is if you like watching terrible movies 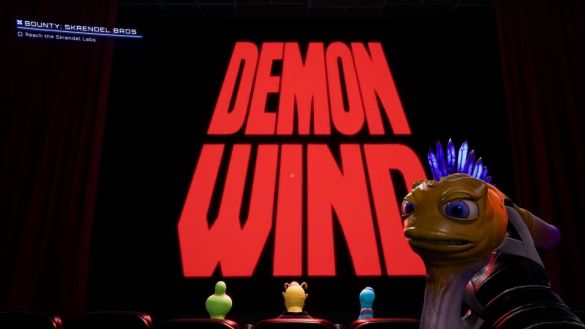 One of the worst-kept secrets in High On Life is that it’s a game that contains not one but four full-length movies. Yes, that’s right. The game developers purchased the rights to four truly atrocious (and thus, hilarious) movies that you can watch while in-game. You’ll see the first one in your own house as Gene incessantly watches Tammy and The T-Rex. But did you know there’s a secret movie theater you can visit to watch more?

How to Find the Secret Movie Theater in High on Life

After you’ve visited the mayor of Blim City, which will trigger after you’ve defeated the first two G3 bounty bosses, you’ll be prompted to either explore the city or continue accepting bounties. There’s no time limit on visiting the movie theater, but this is the earliest point that you can visit.

Head home, then walk right out the front door. To the front and slightly to the left, you’ll see Blorto in his “food stand.” Blorto will ask you if you want food or a “Blorto Special,” which are just Warp Discs that will take you to various places.

But obtaining access to these locations isn’t free. You’ll need Warp Crystals, which you’ve likely been slowly collecting. These Crystals appear when enemies warp in on those circular structures. These circular buildings are powered by Warp Crystals, which are attached to a control desk that might be on top of the building or within it.

Related: All Full-Length Movies in High On Life – Listed

You’ll need three of these Warp Crystals to get to the movie theater. Purchase the Movie Theater location from the menu, then head back home to the Bounty Hunter 5000. Tab down below the Bounty tab, and you’ll enter the Portals Menu. This menu will let you revisit planets that you’ve been to before. Select Zephyr Paradise, then Upper Valley. Activate the portal.

Walk through the portal, and you’ll immediately see a hill in front of you. Climb it, and the location should seem familiar. This is where the mansion was before. You know, with the guy who was addicted to huffing those aliens. But it will look a bit different now, and you’ll see an energy tent beside it. Interact with the energy tent, and you’ll be prompted to use one of your Warp Discs. Select Movie Theater Warp Disc. This will replace the drill structure with a really sad-looking movie theater playing Demon Wind.

Once that theater spawns in, you’ll also get the achievement We Paid For The Rights To Put A Whole Movie, worth a 45 gamer score. Enter, and you’ll be able to sit in on the movie. But note, three guys in the front row will give a running commentary the entire time. No, you can’t kill them.