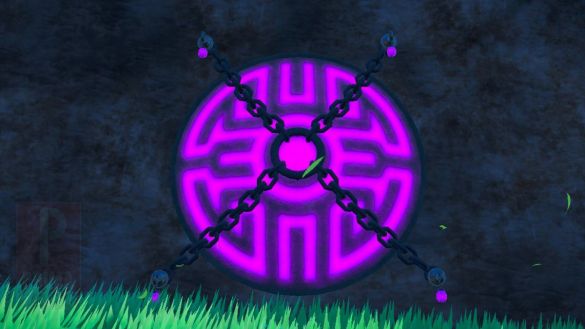 Weirdly enough, Gen 9’s four new Legendary Pokemon are based on Chinese mythology, not Spain and Iberia like the rest of the Paldea region. Could this be a hint for Gen X’s location? Who knows, but regardless, these four sub-Legendaries are cool as hell.

One of them is Wo-Chien. And if you want to add it to your team, you’re going to have to put a lot of work in – it’s not easy! Here’s how to open the purple door and get Wo-Chien in Pokemon Scarlet and Violet.

Note that we won’t post any screenshots of the Legendary Pokemon here to avoid spoiling those who want the surprise.

When first starting the game and getting access to the open world, you no doubt went exploring around South Province (Area One). And if you did, you probably came across a mysterious purple door with four chains around it. What is it, you ask? This is where the Legendary is hibernating.

You can’t open it yet, though. See those four chains? You need to remove them. And to do that, you need to find several purple stakes scattered around South Province. There are eight purple stakes in total – two for each chain.

Click on a link below to automatically scroll to that section of this guide:

Before you go on an adventure to find all eight purple stakes, you need to have met the following requirements:

Stake #1 is in South Province (Area Three). Take Mendoza’s east exit and then follow the path until you see a Pokemon Center. Before you reach it, you’ll see a female trainer. Take the path to her left and follow it around to find the stake at the top of a large rock. You’ll have to jump over a gap to get it.

You’ll need to head back to South Province (Area One) for this one, specifically where the Wo-Chien Shrine door is. Climb up the wall next to the shrine to reach a higher platform. Head forward past a small pond and you’ll see a large rock directly behind it. The stake is on top.

Related: How to Evolve Bramblin into Brambleghast in Pokemon Scarlet & Violet

Stake #4 is south of Los Platos in the beginning area. Warp to Los Platos (East) and climb the mountains directly south of the Pokemon Center. At the top, you find a pool leading into a waterfall and the purple stake.

Fast travel to Mesagoza (South) and then open your map. Look directly east and you’ll see a mountain formation in the shape of a spiral. The stake is at the top of the mountain in the middle. Either run around the base of the mountain until you reach the top or use Koraidon/Miraidon to climb straight up.

Return to Mesagoza (South) and go east immediately. Jump over the small brick wall here and continue along the narrow path, being careful not to fall off into the water, until you reach a dead end. Climb up the wall here to find stake #5.

Stake #6 is just outside of Artazon in South Province (Area Three). Warp to Artazon (West) and climb up the rock face directly to the south of the Pokemon Center. You’ll find it at the top.

Travel to South Province (Area Three) Watchtower and head directly north until you reach a large gap. Jump down and then climb up the rock straight ahead to reach the other side of the gap. You’ll find Stake #7 here.

For the final Stake, warp to Los Platos (East) and then climb up the small mountain range to the northeast. You’ll find it at the top of one of the peaks overlooking the lighthouse.

Related: How to Evolve Primeape into Annihilape in Pokemon Scarlet & Violet

With all eight Stakes collected, a text box will appear with a Pokemon’s cry to let you know that something shifted in the shrine. Return to Wo-Chien’s purple door to find that all four chains are now broken and can now be opened. Interact with the door and select “Yes” when the game asks if you want to “touch the shrine” and your encounter with the Gen 9 Legendary, who is level 60, will begin.

Good luck! And don’t forget to bring a ton of Ultra Balls.