How to Evolve Primeape into Annihilape in Pokemon Scarlet & Violet

There's finally a new Pokemon in the Mankey line! 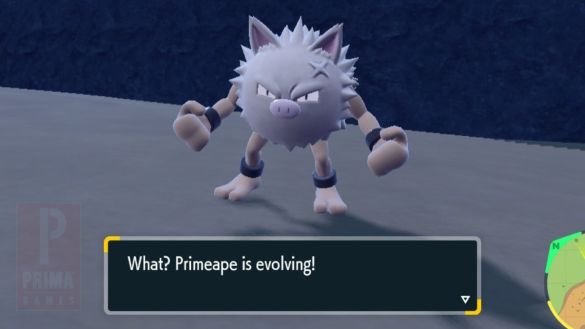 Annihilape is the newest evolution in the Mankey line in the Paldea region. Added in Gen 9, it’s a Fighting/Ghost-type and evolves from Primeape – but only after certain conditions are met. Here’s everything you need to know about how to evolve Primeape into Annihilape in Pokemon Scarlet and Violet.

Evolving Primeape into Annihilape in Pokemon Scarlet and Violet

Once you’ve got your hands on a Primeape, it needs to learn Rage Fist, a new Ghost-type move added in Generation 9. To do this, either level it up to level 35 or, if you have one that’s already over this level, make it relearn it in the Change Moves menu in the Moves and Stats section of its Summary.

Now the grind starts. You need to take your Primeape and have it use Rage Fist 20 times in battle. The easiest way to do this is to head back to Poco Path or Los Platos and one-shot 20 wild Pokemon with it – and don’t forget to bring Ether to restore the move’s PP as it only has 10.

After using the move 20 times, either use one Rare Candy or level it up once naturally by battling and/or catching other Pokemon. If done correctly, it will evolve into Annihilape. Congrats on your new spooky Fighting/Ghost-type Pokemon!