How to Get to the Desert of Hadramaveth in Genshin Impact

Piles and piles of sand to explore 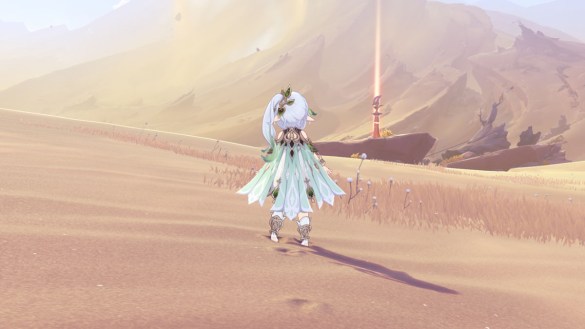 The introduction of new areas is always a good moment in Genshin Impact. Tons of extra hours of content for players to lose themselves into while trying to level their new characters, and the Desert of Hadravameth in the 3.4 is the newest iteration of that, serving as an expansion to the original Great Red Sand region released a few patches before.

And as such, you’re kinda expected to having cleared most of its content, mainly the World Quests which expands on the past civilizations and King Deshret’s reign in the previous eras. But nothing forbids you of just passing by to say hello to the new enemies and even get a few of their loot while doing it. And here’s what you need to do for that.

How to Access the Desert of Hadramaveth in Genshin Impact 3.4

The new desert area is just an extension of the previous desert, and has two easy access points. The first one (and most recommended) is by using the teleport near The Dune of Carouses next to the pyramid. You should easily see the Statue of the Seven there, so go for it and unlock the new area’s map.

Alternatively, if you completed the Aranyaka World Quests, you should have access to Old Vanarana which also connects to the remaining desert right next to its Statue of the Seven. You can even find a stray Seelie around here, so take a look at this entrance whenever you can.

The issue here is that, similar to other newly introduced areas, developers expect players to have completed most of the previous content, including the World Quests (something many players haven’t even touched) to access a few of the areas, where you can find not only treasure but Ascension Items for ascending newer characters such as Alhaitham.

As a result, new players are soft locked out of leveling said characters and newer weapons until they can actually catch up with the current content, something that can take days or even weeks considering how long the game has progressed since release.

They have somehow addressed this problem for time-limited events with the Skip function, but reaching new areas as a new player is still quite a hassle. But differently from Inazuma, there’s nothing that really stops you from walking all the way from Mondstadt to the new deserts. You can get the required items and ascend their respective characters if you want. It will just not be as fast as you can expect.