How to Get the Veles-X in Destiny 2

Keep it secret, keep it safe. 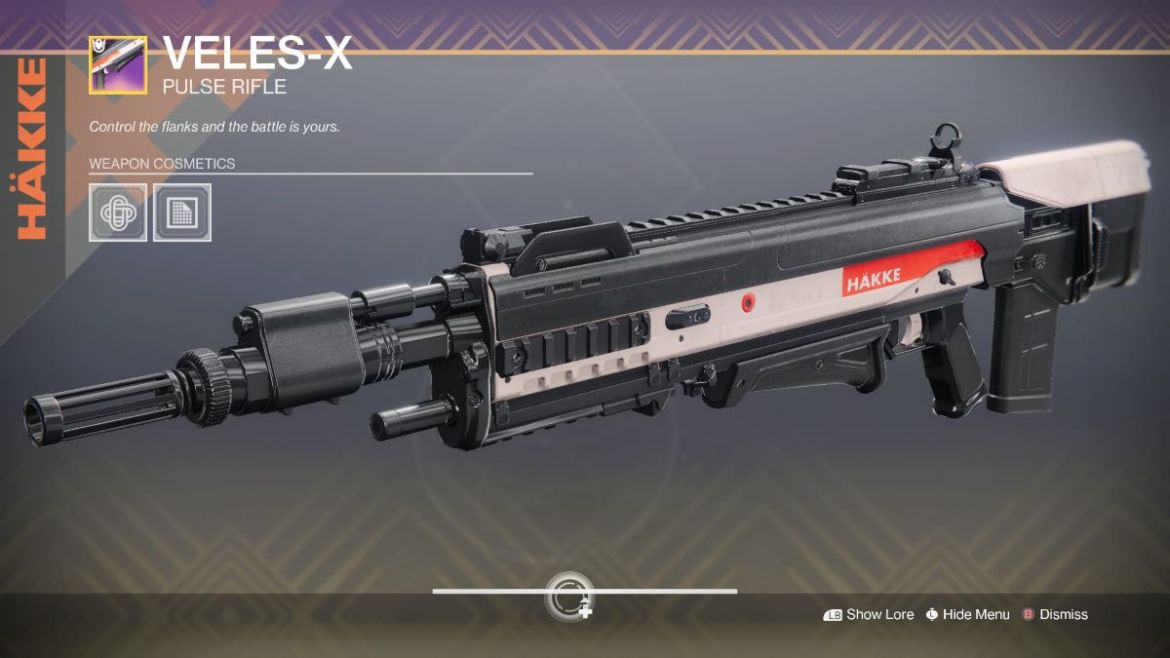 Season of the Seraph should honestly be renamed to Season of the Pulse Rifle. Obviously, Revision Zero has stolen the spotlight, but there’s a legendary Pulse Rifle that might have caught your attention, too: the Veles-X.

Unfortunately, the Veles-X is unlikely to replace the Revision Zero as your favorite Pulse Rifle, but if you’re looking for a Legendary Pulse Rifle that won’t take up an Exotic slot, it’s worth considering. It pairs beautifully with a Void build and its long range and stability will make it great for most difficult PvE content.

But maybe you’re not even thinking of bringing it onto the field and you just really want it because it’s necessary for the Seraph Triumph Seal. Either way, here’s how you get the Veles-X in Destiny 2.

How to Get the Veles-X in Destiny 2

Head to the Tower and speak to Lord Shaxx, the Drifter, or Commander Zavala. In their vendor menu you should see, right beside the Ascendant Shard, a gun with a gold Masterworked border. This is the Veles-X, and you can obtain it by completing Rank 16 with any of these vendors.

Yep, you’ll need to hit the top level for any of these vendors to unlock it. Each of these Vendors also offer their own unique ornament for the Veles-X, which is obtained once you reset your rank with that vendor. For example, resetting with Lord Shaxx will earn you the Volos-X, which applies a red paint job with the Crucible emblem across the side of the gun.

Related: How to Get the Wolfswood Cloak in Destiny 2

Here are the perks you can expect once you get your Veles-X.

All Veles-X Perks in Destiny 2

The best roll for the Veles-X will be the roll that best suits your build. But it’s recommended you select Repulsor Brace for Trait 1, Golden Tricorn for Trait 2, and Vanguard Vindication for Origin Trait. Though the Origin Trait is far less important.

Good luck getting the Veles-X, guardian!