34 Pesos for a Long Island Iced Tea and a juicy confession, what a deal 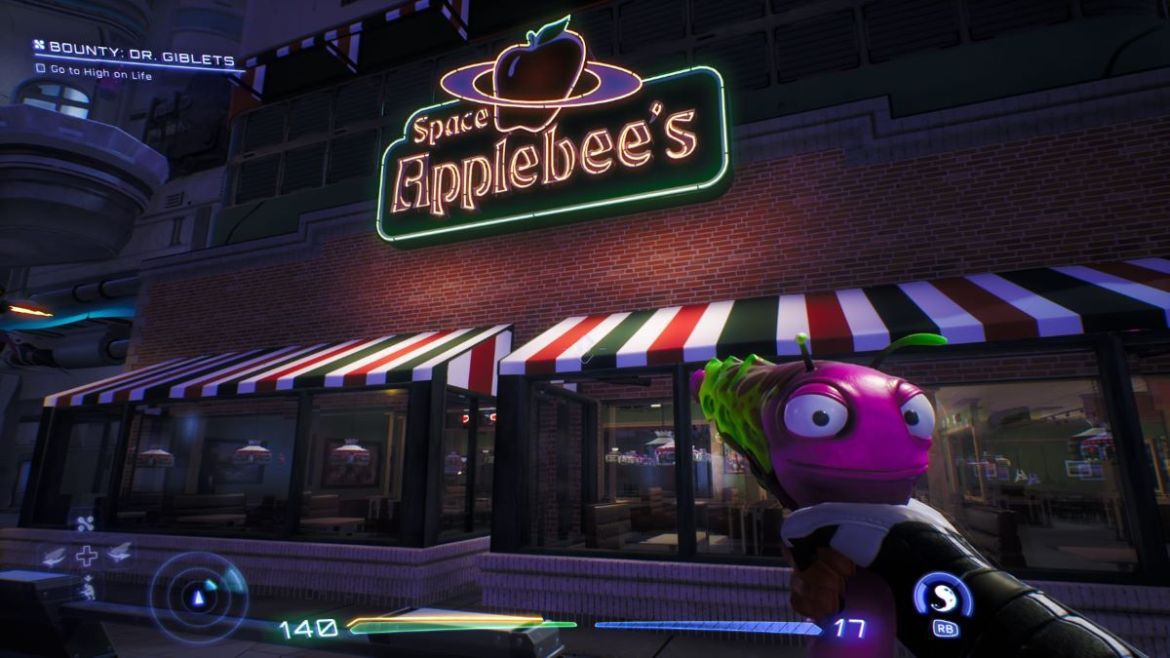 A handful of missable achievements exist in the comedy sci-fi shooter High On Life. One of them is to pay your bill at Space Applebee’s. But you’ve likely seen Space Applebee’s long before you could access it (much less order some solidly okay space grub and pay the bill).

Here’s how to get inside Space Applebee’s, chow down, and pay that bill in High On Life.

You’ll first find yourself out of Space Applebee’s once you’ve defeated the Skrendel Bros. The leads for the G3 have gone cold, and you’re in dire need of leads on the next potential bounty, Dr. Giblets. Using Detective Mode, you’ll hunt for leads through the Slums of Blim City, eventually making your way to previously unreachable parts.

During your investigation, you’ll pass by Space Applebee’s, but the doors will be locked. Don’t try to force it; you’ll be able to open it naturally later in the game. Late in the game means after you’ve found and turned in Dr. John Giblet’s bounty.

Returning home, you’ll find that your sister Lizzie has vanished. Gene will suggest that you go to Tweeg, her alien boyfriend’s, workplace, which is Space Applebee’s. Head there with Kenny, who will then share a very intense confession with you. All the while, you’ll be able to select food and drinks, wracking up a bill.

But just as you get your entrée, you’ll see Lizzie and Tweeg outside the Space Applebee’s window. It might be your first instinct to run out there and save Lizzie, but don’t rush it. The waiter has kindly already given you your tab, which is on the table. Interact with it, and you’ll pay the bill. It’s surprisingly affordable. If you walk out the door of Space Applebee’s without interacting with the tab, it will immediately shut behind you, and you will no longer have access to it.

Paying the bill will net you the achievement Eatin’ Good in the Neighborhood, worth 20 gamescore. And it will keep you from being blacklisted from Space Applebee’s.