How to Evolve Bisharp into Kingambit in Pokemon Scarlet & Violet

This one's tricky but worth it. 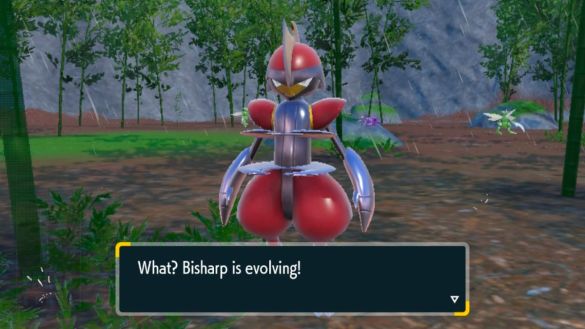 If you’re after Bisharp’s new Gen 9 evolution in Pokemon Scarlet and Violet, it’s not as simple as just going out into the Paldea region and catching one – you need to put the work in. Here’s everything you need to know about how to evolve Bisharp into Kingambit in S&V.

How to Get Kingambit in Pokemon Scarlet and Violet

Before we get into it, note that your Pokemon need to be at least level 45 in order to do this. Beating a few Gyms to boost your catch chances will also help immensely. Kingambit isn’t a Pokemon that you’ll be able to snag as soon as your Paldea adventure begins so just be aware that you’ll need to grind first.

Click on a link below to automatically scroll to that section of this guide:

To evolve Bisharp, you need a Held Item called Leader’s Crest. It is found by catching (not killing) a wild Bisharp, but not any wild Bisharp – it has to be one leading a group of Pawniard.

There is only one place in the Paldea region where you can one of these. It is in a bamboo forest in North Province (Area Two), home to many level 50+ Pokemon. You can find it on the map easily by looking for the Team Star Fighting Badge since this is also where the boss of Team Star’s Fighting crew resides.

Take the Bisharp that you just caught and make it your main Pokemon. Double-check that it’s holding the Leader’s Crest. You need to use the Pokemon to knock out THREE other Bisharp leaders – don’t catch them like before.

Again, if you’re having trouble finding the groups, keep running around until they spawn in. They are rare so have patience.

Related: How to Get Tatsugiri in Pokemon Scarlet & Violet

Upon beating the three Bisharp leaders, either use a Rare Candy on your Bisharp or level it up once naturally and its evolution into Kingambit will automatically trigger. Congratulations on your new Blade Pokemon!