The God of Lightning is upon us! 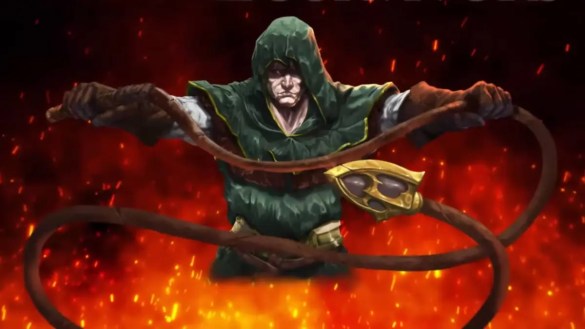 Poncle has delivered a new secret to us, and it is apparent that a new cool character is making an appearance in Vampire Survivors. This time, based on the name of the character, it’s a demonic entity resembling the thunder god Raijin from Japanese (Shinto) mythology. Prima Games will help you discover the source of the roaring thunder on the tiny bridge in Vampire Survivors and will tell you how to unlock Scorej-Oni, the new secret character that just got released.

How to Unlock Scorej-Oni, Secret Character in Vampire Survivors

Scorej-Oni is unlocked on the new “Tiny Bridge” stage, so you ought to unlock that stage before going through with this.

Related: How to Unlock Tiny Bridge in Vampire Survivors

Upon landing on the stage, your goal is to run far, far east (right). We have unlocked Scorej-Oni by using Queen Sigma and the 50% boost on movement speed from Wings, and it took us about 5 minutes (Hyper mode, so actually around 2 and a half minutes of real time) to get to the mini-boss Scorej-Oni. The mini-boss is not problematic to deal with.

He is fairly slow, and we’ve allowed him to hit us a few times without being one-shotted by him, so there is more than enough time to step back should he catch up with you and get you in his range for damage dealing. After you finish off Scorej-Oni, the usual animation comes up:

All that you need to do now is to go on and buy Scorej-Oni from the Play Menu.

Scorej-Oni does not have a starter weapon. Instead, he has a hidden Lightning Ring weapon which he gains every 8 levels.
In addition to this, every time he loses Health, he will retaliate with a Lightning Ring shot.

Now, let’s move back to the mythology of ancient Japan. Assuming that Scorej-Oni is made based on Raijin, the counterpart Fujin (Wind God) should be on the opposite (left) side of this map (not now, but probably someday in the future when and if they decide to implement such a character in the level).

That’s about it for this guide. We hope you will enjoy doing all sorts of shenanigans with Scorej-Oni and we invite you to check out our Vampire Survivors game tag below.

Related: How to Unlock Seal in Vampire Survivors