How to Defeat Krubis in High On Life - Prima Games
Tips

How to Defeat Krubis in High On Life 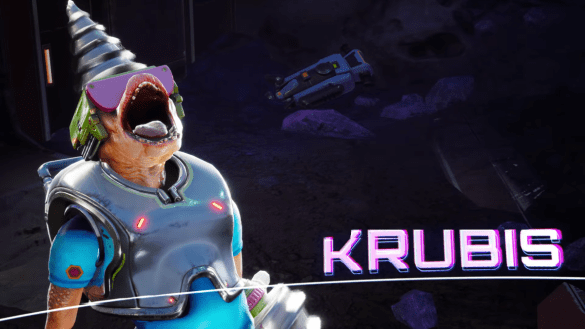 If you’ve accepted the Krubis bounty on your Bounty 5000 in High On Life, you’re well on your way to becoming Earth’s Savior™. But once you’ve actually made your way through the mines to encounter Krubis, who looks like a 90’s cartoon knockoff villain, you might have noticed that there’s a big step up in difficulty from your battle with 9-Torg.

Krubis has a more diverse kit than the evil ant clone and has a much more robust health bar. But with persistence, skill, and the right approach, he’ll go down just fine.

How to Defeat Krubis in High On Life

The Essentials for Beating Krubis

The arena you’ll fight Krubis in is spacious, with plenty of cover. Above you will be hook bees, which you can grapple on to create distance. You’ll use these a lot to create distance or bide time until your health recovers. Krubis’ kit is primarily a shotgun with a magma saw blade. This latter attack will tear off a huge chunk of your shields. Once he hits the final third of his health bar, he’ll begin using dive attacks.

The Strategy to Beat Krubis

Once the battle starts, you’ll have a few seconds to get in some free shots (or even a Goop Shot), as Krubis has an opening animation where he stands still. But don’t stay too close to him. Krubis will immediately begin shooting at you once that animation ends with either his shotgun, which has decent range, or his saw blade, which can travel a very long distance.

Maintain distance as best you can, using the hook bees to traverse the arena, land, then take a few potshots at him before repeating the cycle. You’re not 100% safe in the air, as the saw blade is definitely airborne and can hit you. Krubis will try to close the gap between you with a sort of hover dash where he skates along the floor. When he does this, retreat immediately.

With this strategy, you’ll eventually chip away at his health, causing him to burrow underground and leave the field. Minions will then flood the arena. The crossfire can be difficult to manage, but take cover where you can and restore health. These grunts can be a blessing in disguise as they’ll drop shields, which will put you in a better place when Krubis returns to the field once these grunts are dead.

When Krubis reappears, he’ll be more aggressive and more mobile. The hover skate he did in the first phase will occur more frequently, making it harder for you to land those chip shots. Manage your health here carefully, engage when you can, and run when your health is low. There’s no time limit on this fight, so waiting until your health is restored is always a good strategy before re-engaging with him.

Whittle him down another third, and he’ll dig back into the ground and summon his grunts again. Kill them, get the shields, and prepare for Krubis’ new move. He’ll return to the field, and you’ll notice that red laser beams will cross the field. These beams are an early indicator of where Krubis will dive, and they will follow you as you move. This dive attack might be fatal if it hits you, but because it’s advertised well in advance, it’s easy to keep moving and avoid them. You don’t even have to use the hook bees, but you can if it makes you feel safer.

During this stage of the battle, Krubis will have moments where he briefly pauses his movement. This is your opportunity to use a Goop Shot on him, which will briefly cripple him and give you an opening to run up to him. You’ll see a prompt to knife him. Do so, and you’ll do a nice chunk of damage. Krubis will then dive underground and pop up again with only his head and drill showing. Goop and shoot him while he’s in this position, and he’ll stagger again, allowing you to knife him.

It’s tempting to be reckless in these final moments. Krubis will be on the last tenth or sixteenth of his health and you’ll be tempted to lay in as much damage as possible at the expense of your shields and health. But because you’ll get so close to him, you’ll also be taking a significant amount of damage. Play it cool, keep an eye on your vitals, and continue the cycle of shoot, stab, take cover until Krubis is defeated.

Once he falls, whittle away a piece of his alien anatomy for your bounty reward, and you’ll get the achievement Cold-Blooded Driller, worth twenty gamer score, and a new gun. Congrats, Bounty Hunter!