How to Beat The Howling Aces in Doggone Dogfight in Cuphead: The Delicious Last Course - Prima Games
Tips

How to Beat The Howling Aces in Doggone Dogfight in Cuphead: The Delicious Last Course

Flying those PoZ Zaku colors, nothing suspicious there! 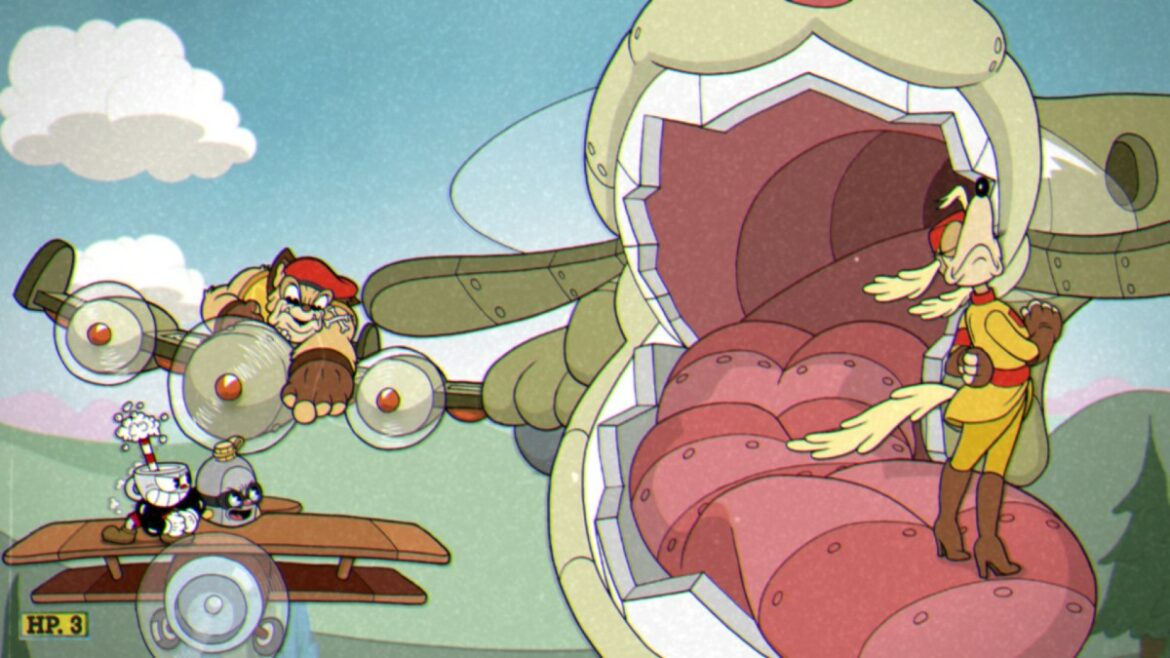 The Howling Aces are a group of World War II-era fighter pilots who happen to be dogs and more interested in murdering Cuphead than whatever it is ace pilots are actually supposed to do. These are the foes you encounter in Doggone Dogfight, a stage that uses your own controller against you! Here’s how to beat it.

Related: How to Beat Moonshine Mob in Cuphead: The Delicious Last Course DLC

So the fight starts with your Cup-person of choice standing on a little plane with a much larger one above. A big, beefy bulldog in Street Fighter Alpha cosplay is your first opponent, and he has some pretty specific attacks. He’ll drop down from his plane for both, but his pose is the tell. If he’s flexing his guns, he’s about to shoot his tattoo at you. Yeah. He shoots three one by one in a vertical pattern, that hang for a moment before coming back to him in the opposite order. One of them is always parry pink.

The second phase puts you on the enemy plane while a group of four smaller dogs circle you and bark deadly “WOOF” letters at you. Occasionally one will be pink of course, but this is really all you do in this phase. However! There’s a secret here! If you look closely as you deal damage, you’ll see that each pupper’s smoke trail turns from white to grey. This is a signal they’re low on health.

If you get all four smoke trails to grey before taking any of these foes out, you’ll enter an alternative third phase! In this one, which is significantly easier than the normal third phase, the pups will throw pineapples at you from windows on either side of the screen. A laser gun will also pop out on occasion to harass you, but overall the stuff happening on screen is far less busy here.

But you’re probably looking this info up for the real third phase, which is a pain in the ass. The lady dog who totally isn’t a Nazi takes charge of the fight, and uses several huge laser guns to get at you. These attack in waves of three, with specific aiming patterns. The first one will show you a straightforward shot path you can easily sidestep. The second is usually a pair of intersecting shots, so you have to spot the safe areas. Finally, the third wave covers the whole standing area for a brief moment, so you have to wait a beat and then jump, using a dash if needed to stay in the air long enough.

After the lasers, the plane will try to barrel roll you to death. Your platform will move to any side of the screen, and your controls will be altered accordingly. By default you’ll still be using left and right, and have to adjust to what that translates to on the screen. If you die you can change to a scheme that adapts to where your Cup-person is, which could be easier to wrap your head around.

The dog lady will start throwing food bowls at you, and they come in two colors. The red ones will always fly across the platform, so you’ll have to avoid them actively. The yellow ones go a bit higher, so you can simply let them pass overhead. Of course, the game tries to trick you into getting hit by one when dodging the other, so just make sure you aren’t jumping right in the middle of the screen as the bowls meet.

Your best weapon here will be the Crackshot, which seems to be the best weapon for literally all of the game, so there’s some food for thought. Anything that helps you not need to aim as much while the screen is disorienting you constantly will make that third phase much less painful. You need all the help you can get, especially if you’re chasing those S-Ranks, am I wrong?