How to Beat Dragonlord Placidusax in Elden Ring 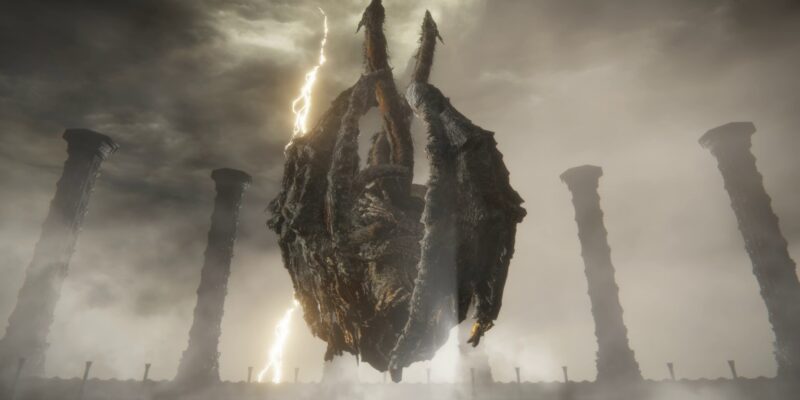 Here’s a boss that came up in our collaboration feature about the toughest bosses in Elden Ring. And while my entry was very different (I hadn’t finished the game yet), I can now understand why Dragonlord Placidusax was chosen by Aidan. This optional boss is big and nasty, and in a mean kind of way that makes it seem easier than it is! So, after defeating it myself, I’m here to share a little bit of strategy. Here’s how to beat Dragonlord Placidusax.

First, you need to find this thing. You need to reach (or go back to), the Crumbling Farum Azula. For starters, you just need to get through the level until you reach the Beside the Great Bridge Site of Grace. It’s the one just before you fight Maliketh. There’s an elevator right there, ride it down and make an immediate right into a hallway (poorly) guarded by some Gnolls.

Related: Prima Teama Collab: Who are the Hardest Bosses in Elden Ring?

Run past the Gnolls to an outside area, right out of the church and toward the cliff edge you can see with all the trees. There’s a space you can drop down to from there, and really only one path forward. Once you get to a floating chunk of coliseum wall, there’s a space different from the others you can lay down on. This strange act sends you right to the boss room.

Note that if you want to summon some backup, you have to do so before the laying down part. Be careful not to accidentally trigger the encounter because some jerks will drop their symbol right on top of the prompt spot.

Dragonlord Placidusax is very large and very powerful. This is definitely one of those “don’t get hit” bosses, because you’ll get one-shot even as a tank. The good news is this massive beast takes its time to telegraph all its moves. Some of the dodge timing can be really strict, but you get plenty of time to react and punish.

You’ll get the most damage from melee attacks, especially ones with thrust affinity. Otherwise Placidusax has super high resistance against all status effects and elements. You can still inflict rot, bleed, etc. However it’s not worth the effort.

What is worth the effort is staying behind the boss as much as you can. You’ll have to keep moving when the lighting AoEs start coming down, but if you stick to the back you’ll have less stuff to deal with. What you have to really watch out for though is its fire breathing, which covers an entire half circle on whatever side you’re on. You can outrun it, but you only have a moment to start.

Once you trigger the second phase, things start to get really tricky. Placidusax will start flying and disappear. After a few moments it will pop out of a cloud and swipe you, and it happens pretty fast. Your worst enemy here is the camera, since you’ll have to quickly swivel it around to make sure you see the cloud as it materializes. Once you dodge the swipe you’ll be allowed to lock on again, and it won’t break for subsequent vanishing antics.

There’s a thoroughly obnoxious laser attack you’ll have to look out for; both the boss’ heads will shoot firey laser beams that move and intersect, making dodging tricky. If you can get to either side far enough, you’ll only need to dodge one head’s beams. Otherwise just do your best to watch the beams so you can dodge just before they touch you, because they recede back and will catch you then if you’re too early.

Lastly, Placidusax will fly up in the air and slam a spear into the ground, with some slight AoE reach. But the spear produces a massive AoE and the best option is simply running away. You get a comparatively generous amount of time, and even if you don’t see the spear there’s a distinct audio cue telling you when to flee.

Being totally frank here, unless you’re a Pro Gamer this fight can get really exhausting without help. The Dragonlord’s moves are all huge and heavy, leaving most players with no margin of error. That’s made worse since there’s no Site of Grace nearby, meaning you have to take the elevator down and run past the Gnolls every attempt. Considering all that, having another body or two in there to share aggro is a huge stress reliever.

After winning you’ll earn a new Remembrance and a shitload of Runes. Hooray! There’s a specific questline that makes tackling Dragonlord Placidusax more rewarding, but that’s for another guide!