I love cursed weapons with silly designs in my game 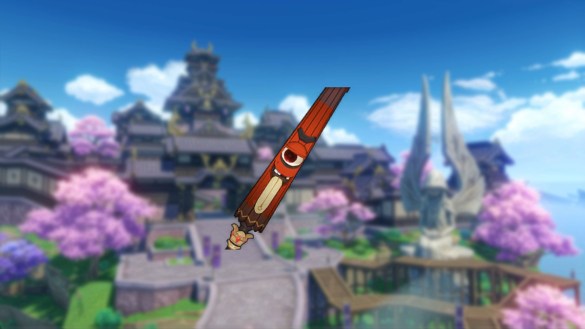 Toukabou Shigure is a 4-star Limited Event Sword in Genshin Impact, distributed as a reward in the Akitsu Kimodameshi event of the 3.3 version. Its refinement item “Parasol Talcum” is also obtained in the same way, making it a fully F2P weapon that can easily be refined to Rank 5.

The weapon is one of the few swords in the game with Elemental Mastery as its substat, making it very valuable with the ascension of new Dendro characters and new build paths. But the sword isn’t reserved for that sole element as many others can also use it well. And here you’ll find out how they do it.

EM Swords are usually either from limited banners (Alley Flash, Xiphos’ Moonlight, Freedom-Sworn), have generic passives (Iron Stinger), or are strangely capped as is the case of the Dark Iron Sword. Toukabou Shigure is more of a second case, but since you get its R5 for free, it can be a good alternative if you don’t feel like forging five copies of Iron Stinger. You can also level it cheaper during the event, so use this chance!

If you’re struggling with finding the best fit for this free weapon, here are some good choices:

The uncrowned queen of Hyperbloom comps is more popular than ever since Dendro was introduced. 3.3 also gifted her a perfect artifact set for this specific team comp with Flower of Paradise Lost. Shinobu has no huge need for Energy Recharge as most of the Electro applications come from her skill, making this parasol the perfect gift for her this holiday season.

Kazuha always prioritizes Elemental Mastery in his weapon, but it also depends on your Energy Recharge to be able to Burst consistently. This weapon’s passive can squeeze him some extra damage for bosses while also giving that extra push to reach the 1000 EM dream.

Like Kuki Shinobu, Nilou doesn’t depend hugely on her Burst and can forego some Energy Recharge if you want more damage. She still prioritizes HP on her weapons, but there’s a severe lack of good options for that currently, so we stick to what we can get.

Either Jean or Bennett can use the weapon when paired in the famous Sunfire team comps where their Bursts overlap to create nonstop Elemental Reactions. Kaeya is also a suitable holder for similar teams, although noticeably weaker.

Dendro Traveler is a viable option, but ER% is usually better due to its wonky 80 energy cost. And although not yet released, Alhaitham is also a Dendro character, so he’ll probably have some good use for its substat.

Where to Find the Ascension Materials for Toukabou Shigure

Completing the Akitsu Kimodameshi will gift you some of the materials, but you’ll probably still need a lot more. Here’s the complete list:

Also, remember to save up at least 900,000 Mora for the Ascensions and Leveling.

The target domain is the Inazuma’s Court of Flowing Sands, which needs to be entered on Tuesdays, Fridays, or Saturdays to get the desired material. Make sure to challenge it in the highest difficulty, but avoid using Electro characters as many of its monsters are immune to that.

Where to Get the Prisms Ascension Materials

The Primal Construct creatures in the desert areas of Sumeru drop those. Use the Adventurer Handbook to track them down, or take a quick look at our other guide on how to get them here on Prima Games. Otherwise, the Paimon’s Bargains shop has both Turbid and Damaged Prisms for you to get.

Related: How to Get Turbid Prisms in Genshin Impact

Where to Get the Handguards Materials

Those things right here are the elephant in the room. And if you have ever leveled any Inazuma character, you know EXACTLY what I’m talking about. Handguards are common drops from Nobushi samurais around Inazuma, and just like Fungi drops, they are tough to come by. The Nobushi will most likely drop one or two of the lowest-grade materials, so be ready to start a rampage on those bandits for a while.

Handguards can also be bought from Paimon’s Bargains, but the Famed Handguards are nowhere to be found in the shop. So you’ll have to stick to farming them with the Handbook again for quite some time.