Genshin Impact Photo Event Day 1 – Outside the Canvas, Inside the Lens: Greenery Chapter 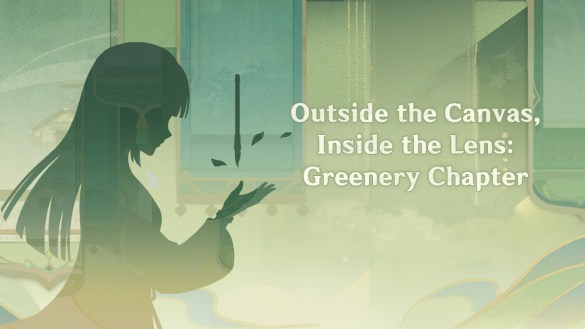 The good and old photography event in Genshin Impact is back. Outside the Canvas, Inside the Lens: Greenery Chapter has the Traveler traveling around all the previously visited regions in Teyvat (now including Sumeru) to bring some photos for the Inazuman painter Asagiri, as she once more needs our help to escape her creative slump.

The event requires you to have the regular Kamera equipped at all times as you take specific photos in the mentioned places. Luckily, the event has been overhauled since its last appearance, and now features an option to give you the best position for your photo as soon as you reach the correct position. And since this was the most annoying part of the event’s last iteration, this one’s already a lot better.

Genshin Impact Outside the Canvas, Inside the Lens: Greenery Chapter Day 1 Guide

The new feature is presented to you as soon as you interact with the camera icon. You’ll see three different angles at the top of your screen, so pick whichever you prefer. The camera will be automatically adjusted to your chosen angle as soon as you take the shot with your gadget.

Get to your positions, select your best Anemo party member, and go for it! I went with Sucrose here since she has one of the most beautiful Skills in the game, but anyone from Venti, Heizou, and even the Anemo Traveler can work here. The angle is automatically met here, so no worries.

Who would be better to showcase Geo while mumbling about its life other than Zhongli, the CEO of Geo himself? You don’t even need to wait for his idle. Just get him on the team and the Osmanthus wine will automatically follow. Any character will work, but it just feels right to have him in this picture.

Rewards for each successful photo are x30 Primogems, x20000 Mora and 2 Hero’s Wit. Use this event alongside other ongoing activities such as the Fabulous Fungus Frenzy to get those extra Primos for Nahida, Yoimiya, or any of the upcoming banners, such as Wanderer or the upcoming reruns.