Genshin Impact: How To Unlock the Underwater Teleport Waypoint in Sumeru

Spoiler: You need a Dendro character. 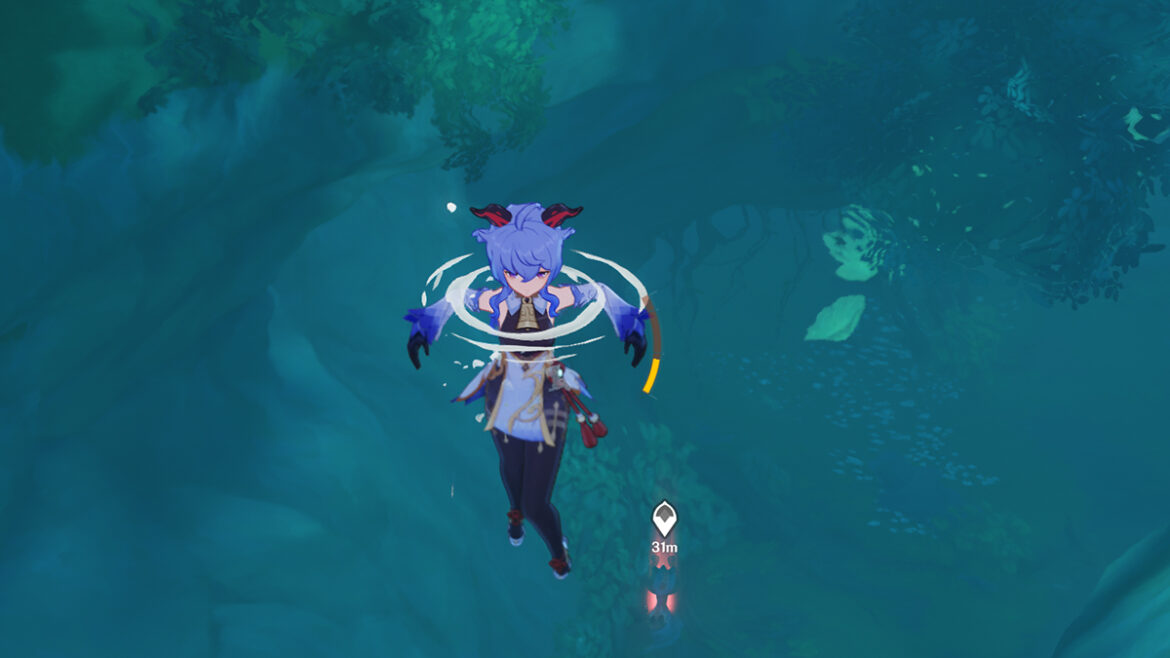 How to Unlock Sumeru’s Underwater Teleport Waypoint in Genshin Impact

As you may have guessed based on similar mechanics in previous Genshin Impact regions, unlocking this Teleport Waypoint involves some shenanigans. Starting from the small lake where the Waypoint is, look to the east side to see a waterfall with a tiny platform housing a Four-Leaf Sigil and a Bouncy Mushroom. Warp up to the Mushroom using the Sigil and then bounce up to the top of the waterfall.

Turn right and you’ll spot two Ruin Machines. Take them out to unlock the nearby mechanism. Activate it to lower the water in the lake a little bit, but still not enough to access the Teleport Waypoint. Then head through the tunnel to the left of the mechanism (if you’re facing it). You’ll eventually emerge into an open cavern with some Treasure Hoarders and a Dendro barrier straight ahead of you.

Walk to the right and you’ll see another mechanism, though it’s locked, requiring you to take three different actions to unlock it. First, make a slight right from the mechanism until you come to a stone block covered in winding roots. Use a Dendro character like Traveler (Dendro) or Tighnari to make a Dendrograna appear – and a set of Fungi enemies. Beat ’em up, and then summon the Dendrograna. While the effect is on you, use a Charged Attack on the Dendro block slightly to the west to unlock a Dendro Totem. Use either a Dendro character or a Charged Attack with the Dendrograna to activate it.

Next, use a Charged Attack while holding Dendrograna on the Dendro block to the left of the Dendrograna to open up a small pathway. Defeat the Fungus here, go through it, and then turn around quickly once you’re through the other side. Climb up the wall so that you’re on top of the small tunnel you just passed through and you’ll see another Dendro block. Use a Charged Attack while under the influence of Dendrograna yet again to unlock another Dendro Totem. Trigger it.

Return to the entrance of the open cavern and face the Treasure Hoarders. You’ll spot a Dendro Totem below the platform they are on. Activate it and then go back to the entrance yet again where you’ll see two Four-Leaf Sigils in the air to your left. Warp to them to get behind the Dendro Barrier where the second Dendro Totem is waiting for you. Trigger it and the force field will dissipate, leading you into a fight with the enemies. Defeat them.

Go back to the mechanism and activate it, then return to the small lake to reveal that the water has completely drained. Not only are there new puzzles to solve and Seelies to follow, but you can now access the previously-underwater Teleport Waypoint. Congrats!

If you return the mechanism and jump down the newly-drained cavern there, you’ll find some Ruin Machines to bash and the entrance to the Fragment of Childhood Dreams Domain (click here to learn how to unlock it).

Need more help with Sumeru and Genshin Impact’s 3.0 update? Check out our other guides: