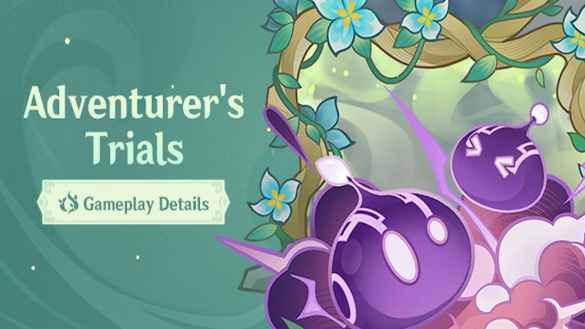 The first event to arrive in Genshin Impact version 3.2 is the Adventurer’s Trials. As showcased during the Livestream trailer for this update, this is doubtlessly one of the best, simplest, and most fun events Genshin Impact has ever granted us.

Instead of focusing on mindless combat, the goal is to just have fun using characters’ skills in some of the most unintended ways during a series of minigames. Here’s how to easily complete the first batch of them, named Sequential Trial: I.

All players who have reached Adventure Rank 20 can access the event via the Events option in the main menu. No prerequisite quests are needed, just log in and go. You can challenge the trials either alone or match with other players, but trust me, this mode is WAY better with more people. Grab your friends and get in!

Related: How to Unlock the Scaramouche Weekly Boss in Genshin Impact

How to complete Sequential Trial: 1

As implied by the name, you’ll be completing different trials one by one, using different characters in each of them to complete your minigames. For the first trial, your challenges are Superfast Hat Trick, Smash ‘n’ Bash, and Shieldbreaker.

The introduction to this event couldn’t be better than bringing a literal child terrorist to the soccer field. Using either of the characters, you have to push the Electro Slimes into any of the 4 goals by making use of the Overload reaction. Attacks, charged attacks, and skills are all allowed.

Yanfei’s slightly better here, but Klee will work out just as fine. Be mindful of the Internal Cooldown (ICD for short) between reactions and go for the big slimes once they start appearing as they are worth 5 points.

Wolfboy’s here to break some rocks, so let’s do it! Your goal is to quickly smash all the blocks as fast as you can. Golden Blocks are worth 3 points. Brown Blocks instantly destroy every block in its line and Red Blocks make everything go boom.

This is one of the few times where a Claymore Charged Attack can be useful. Also, you can use your Burst here, so use it as soon as it’s up.

The best challenge by far. Using Kazuha, Swirl your way to victory by infinitely spamming his Skill and Burst each time you see a new Abyss Mage coming your way. As new types of mages appear, it becomes easier and easier to break their shields as they realize how wrong they were to commit the crime of existing.

This will most likely be done in less than 30 seconds, especially if you’re paired with more players. The biggest challenge is to bear listening to Kazuha’s monologue. Every. Single. Moment.