Hands down the best event in the game 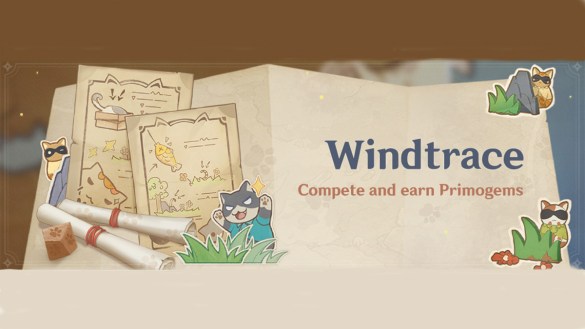 The kill or be killed – or rather, find or be found – event in Genshin Impact makes its return. Windtrace is basically the game’s version of Prop Hunt. The Hunter’s goal is to find the three Rebels, who’ll use disguises, trickery, and a lot of creativity to avoid being captured. Unveil them all, or run for your freedom during the most important three minutes of your life. Kinda.

This seasonal event is either praised or hated by players, and I’m on the lovers’ team since there’s nothing that feels as good as slipping through Hunter’s fingers right in from of him or simply finding a random person disguised as a box in the most improbable place possible.

How to Unlock and Participate in Windtrace

The event is native to Mondstadt, and it’s available for all players at Adventure Rank 20 or higher. Look for the cat symbol that should be in the city and speak with Gygax to start playing. This is a co-op only event, so be warned.

From now on, you can chat with him to be matched with 3 other players. The role you get is completely random, but most of the time, you’ll be playing as Rebel. Playing with a custom co-op party will complete challenges but won’t get any coins out of those matches. Gotta work hard for those.

Prizes are distributed by getting Windtrace Coins. All of the rewards are obtained when you get to 6000 coins, but there will initially be a coin cap. The cap will slowly increase each day for 6 days, and all rewards will be available after that.

Primogems are distributed up until 3000 coins, so the other 3000 are more of a bonus than anything. Getting the full cap gives you x420 Primogems, x14 Hero’s Wit, x380000 Mora, and 2 of each blue-tier Weapon Ascension Materials.

There are also the Windtrace Challenges, which are optional objectives to complete in your matches. There are challenges for both Rebels and Hunters. Completing all of them nets you x10 Hero’s Wit and x20 Mystic Enhancement Ore.

No passives or Skills are available, so the character you choose is (almost) purely an aesthetic choice. Your abilities will instead be exchanged for Windtrace-related skills.

You can customize some of your skills by going into the Event menu and choosing Windward Arts. Hunters have three different Normal Attack options while Rebels have only a single alternative one.

Rebels can choose between becoming invisible or placing a Beacon that turns all their allies invisible while around it. Hunters can have a capturing net that dispels disguises, a small trail that reveals where they can find Rebels, or a Sensor Aura that warns them if there’s a Rebel nearby. All of these have their respective cooldowns.

During the match, a Favor will be dropped somewhere in the field. If a Rebel finds it, they can activate their “Burst” which gives them extra speed.

A Hunter will get a customizable skill instead, which includes revealing all Rebels briefly, marking a single one of them for a longer time, or even imprisoning one of them somewhere on the map (without knowing its location).

Choose the ones that fit your playstyle the best. The longer, single-target skills are better for capturing the last participant, so they are used most of the time by experienced Hunters for example, but any of them can net you a swift escapade or a final capture.

Good luck with your hunts!