Don't look at her, her snakes have anxiety 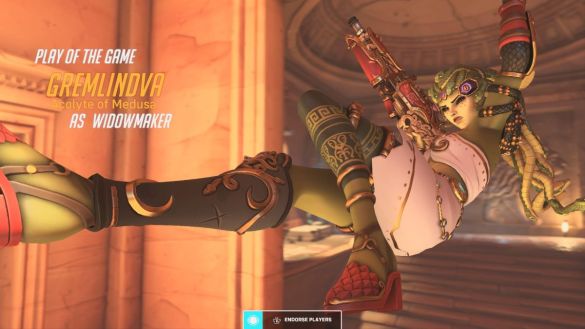 Junker Queen Zeus has descended from her cirrus cloud throne and, to celebrate, she’s throwing a battle royale to see which of the gods are best. Overwatch 2 has brought a new game mode called Battle for Olympus, which pits 7 heroes against each other in a free-for-all battle royale.

But this mode is a little different from your standard deathmatch. The seven chosen heroes each have super-charged Ultimates that can absolutely devastate. And the best of those Ultimates? Has to belong to Medusa Widow. Or perhaps I’m biased.

Either way, if you’re trying to get the Acolyte of Medusa Title, which requires 300 final blows as Widowmaker, you’re going to need to know the best spots on each map in order to wrack up those kills effectively.

This is my favorite Widow map! My best games were undoubtedly here because it has everything you could possibly want. It’s big enough that there’s a decent dispersion of enemies, there’s access to health packs, the Ultimate Charge is close by, and the sight lines are to die for. You can control extremely long corridors, and if you start bullying a tank at a large enough distance, you’ll kill them well before they can ever land a blow.

There’s one God Spot area (well, technically two, as it’s reflected on both sides of the map). You’ll hold this corner, using your Venom Mine to tell you if there’s someone at your back. Essentially, keep your eyes on the road, and someone will soon wander within shooting distance.

And if someone comes up behind you? Go up the ramp and jump down to the second floor. Loop back around to the room whose entrance you put the Venom Mine on. Like, 80% of the time, I’ve escaped this way. The other 20% of the time, there was an enemy in my escape route that pincered me.

Related: All Hero Abilities in Overwatch 2 Battle for Olympus Mode

For every fantastic map, there’s a terrible one. And that’s Ilios Ruins. I suppose the developers thought that Widow would be too oppressive on this map, so the building that Widow’s usually camp on (the large ruin just outside of spawn) has a tree that blocks the line of sight that usually goes through the middle of the map. They’ve also placed a jump pad near it, allowing enemies to jump up to you. There’s nothing worse than a free-flying hog springing up out of nowhere to hook you while you squint through some branches trying to see literally anything.

Because of that, your best bets are to use the smaller buildings adjacent to the larger one. These smaller buildings give you a fairly limited line of sight, but it does have access to a large health pack, an easy escape route and, of course, an Ultimate Charge power-up. But overall, it’s a difficult map for Widow to contend with.

The absolute best areas for Widowmaker are areas with long sight lines, access to health kits, and proximity to Ultimate Charge power-ups.

There is one spot in Petra that’s indisputably the best. It’s this tall rock pillar on the edge of the map. You can grapple to it using the jump pad close by or by grappling to it from the platform. Once you’re here, only three heroes can effectively contest you: Widowmaker, Rammatra, and Pharah. Rammatra will be your biggest enemy due to his large health pool. But anyone who tries will probably be gunned down by another player before they can kill you.

This spot is also good because it has decent access to two small health kits and an easy line of sight to the Ultimate Charge power-up.

A second spot that I like to use for fast escapes is this little alcove. Very few people seem to know it exists, and I’ve had enemies walk right by me on multiple occasions. It’s also a great place to lurk while you’re waiting for the Ultimate Charge power-up to respawn.

How kind of them to include Widow’s map! You’ll want to keep the open side of the map on lockdown. But if there are other Widows, I guarantee you they’ll have the same idea. The best vantage point is the one that is closest to the Ultimate Charge power-up and an easy-to-protect flank. It’s also very easy to escape, as you can either go under (they never expect you to go under) and avoid the trespasser—a fantastic spot for Widowmakers who need to lean on their Ultimate to get those headshots.

The second-best option is here, which is close to a large health pack but doesn’t have the Ultimate Charge or an easy escape, is this corner. It has better sight lines to more active areas, and the large health pack is essentially a get-out-of-jail-free card… but only once. I’d recommend it only if you’re a Widow who knows they can land those fatal shots.

I’ll be honest; I’m not a great Widowmaker. I have far more hours in Torbjorn. But using these locations, I scored between 10 and 20 kills each game while minimizing how much I fed. With luck, these spots will work for you, too.