Are Itto Constellations Worth Getting in Genshin Impact? – Answered - Prima Games
Tips

Are Itto Constellations Worth Getting in Genshin Impact? – Answered

Time to Power Up Ushi! 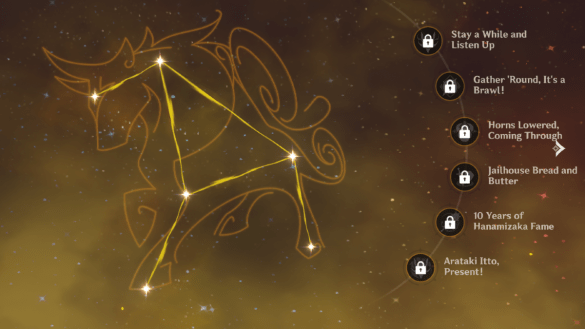 You don’t have to stop at one constellation just because Itto is known to be a hard hitter. Alone at C0, this Genshin Impact character isn’t the head of the gang for nothing. Aside from the fact that he was indeed the one who started and expanded the gang, Itto’s constellations may not be the bright new shiny upgrades you’d think they are but they can be invaluable. If you play him the way many do at C0, you’re going to be playing him the same way at C6, however the heck you want.

C1 Stay a While and Listen Up

Itto’s first constellation is meant to get him back to a full stack of Superlative Superstrength as soon as possible. Normally, you can get about two bouts of charged attacks during Itto’s Burst, but with this constellation, you should be able to easily get in one more savage barrage to clear out all your enemies. Once Itto uses his Burst, Royal Descent: Behold Itto the Evil, he’ll automatically get two stacks of Superlative Superstrength. After that, Itto will regain one more stack every 0.5 seconds for 1.5 seconds.

All the better to restore Energy for Itto, his second constellation is meant to help out his fellow Geo team members and get some cooldown for his own Skills and Bursts. For each character in the party that has a Geo vision, once Royal Descent: Behold, Itto the Evil!, skill Countdowns will decrease by 1.5 seconds and restore 6 Energy to Itto.

While most beginning constellations aren’t meant to be very impressive, Itto’s first constellations are centered around utilizing his Burst to the fullest. It’s what does consistent and quick damage to enemies, mowing them down like they are weeds in the grass. Though, they aren’t entirely impressive.

True to his protective nature, right when Itto’s Burst ends, his fourth constellation is going to make sure that his fellow teammates are going to be okay while he cools down to return to the battlefield. A great way to set up your next attack and support, Itto’s fourth constellation will make sure that party members in the team and all nearby members if you happen to be in Co-Op, will get a 20 percent Defense increase as well as a 20 percent Attack for the next 10 seconds.

This is great if you have fellow team members such as Gordon, Albedo, or Noelle who get boosts from defense in their kit already, it’ll help with the Sub-DPS damage that Albedo can provide, and the Support that Gordon can give to the rest of the party members, and boost Noelle’s shield and healing so that she gets the team back on their feet because Itto is sure to get himself a couple of scraps being out on the field.

Wonderfully so, Itto’s constellations that boost up the talent levels are one of those few exceptions where his first constellation that increases one of his talents by three levels is for Ushi. Masatsu Zetsugi: Akaushi Burst! Is Itto’s Skill when he summons his trust partner Ushi to the field. He’ll distract enemies and help build up Itto’s Superlative Superstrength Stacks the more hits he gets from enemies. And he’s been infamously famous for dealing more damage than Itto at times once he bursts out on the field. Whether you have Itto crowned or whichever level he is currently on, unlocking these constellations will increase the talent level by three.

C5 increases the talent branch of Itto’s Burst by three levels, which, as the very source of his strikes and damage dealing is always going to be a great constellation to look into.

Perhaps the most broken of constellations that have ever come to Genshin Impact is Itto’s last constellation which will increase his Charged Attacks Damage to deal 70 percent more Crit Damage. While in the Arataki Kesagiri state, he’ll also get a 50 percent chance to not consume a stack of Superlative Superstrength. If the increased damage wasn’t enough, being able to continually set up his charged attacks leaves Itto to be one of the best DPS characters in the game.

While Itto’s first few constellations supercharge the quality of his gameplay, they aren’t entirely worth attempting to get in comparison to his latter ones. While it’s to be expected that the last few constellations are going to best of the bunch, it’s hard for most players to get to that. C6 is definitely one of the best constellations and is a great boon for Itto. But his talent increases are more vital to his character build than his first few constellations, which is usually seen as a nice addition, but they shouldn’t be better than the new passives he gets. His C4 is unique and reveals a lot about his character, which is wholesome in its protectiveness and showcases his traits to pep up his teammates. His constellations serve as a great stepping stool, but if you’re comfortable with your Itto as is, he’ll do fantastic at C0. But of course, Genshin Impact players like to gift their favorite characters with a few spoils, as a treat.

Best of luck with your banner draws!