All Materials Required for Ascending Layla in Genshin Impact 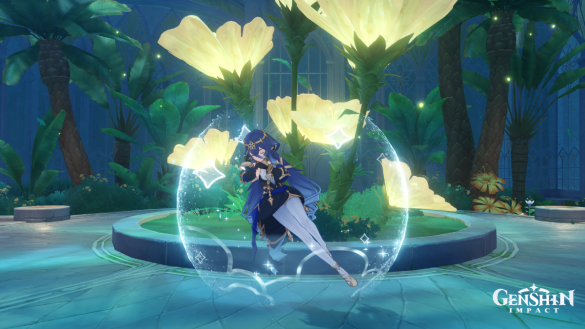 First introduced in our Fungi Adventures, Genshin Impact’s Layla is an overworked scholar at the Academia in Sumeru. Constantly exerting herself for the sake of her projects to the point of falling asleep, it is said that her true genius flourishes while she sleepwalks. Whether in battle or catching up on exam papers, Layla is a genius whiz, and here’s how to get her to max capacity so she’s ready for your team.

Our smart girl is a four-star Cryo sword user, and luckily, her gems and boss materials can both be gathered by battling the Aeonblight Drake. While it is quite the beefy boss, bringing along a bow user is the perfect way to clip its wings once this sucker is airborne. And since it also drops Shivada Jade, you only need to make the Ardravi Valley caverns your daily boss trip until you gather enough materials for Layla. In a cave that’s easy to access just east of the giant but rusted Ruin Guard in the Ardravi Valley that had us all scared when it was first revealed.

As if prepping for any Sumeru characters’ arrival wasn’t hard enough, Layla will require the Nilotpala Lotus. They are usually found in ponds of water just about anywhere in Sumeru, though they are only found once per lotus that you come across in the pond. Having Tighnari or Nahida in the party can really help if you’ve pulled for them to find and gather as much as you can. If you have neither, here’s a little map and guide to where you’re going to find most of them. Luckily, unlike some of the more populous Sumeru exclusives, the Lotus’ regenerate every day and can be farmed daily until you reach the set amount.

Related: Where to Get Nilotpala Lotus in Genshin Impact

As for the other item you’ll need to ascend Layla, you’ll need Scroll drops that you usually get from Samachurls. It’s pretty handy that this four-star requires a drop that has been around for a long time, but if you don’t have enough to build her, you can always go to your Adventurer’s Journal. By looking through the enemies tab, you can track down large gatherings as it tracks the enemies across the map, helping you save time by going out and looking for them randomly.

Talent Ascension Materials: What You’ll Need Up To Crown

It would be really nice not to have to also use Ingenuity for Layla so soon after Nahida, but here we are once again. At the domain of Steeple of Ignorance, you’ll want to gather plenty of Ingenuity, which in the rotation will be up for grabs every Tuesday, Friday, and Sunday. Together with more Scrolls that you can get from Shamachurls, these are going to be the talents and enemy drops that you need in order to ascend any of her talent branches. Past Level Six, Layla is going to require Scaramouche’s World Boss drops. If you don’t get her required drops, then you can always use Dream Solvent in order to transfigure it to the one you need or wait another week.

Keep an eye out for her build guide and best of luck pulling for your tired college student!