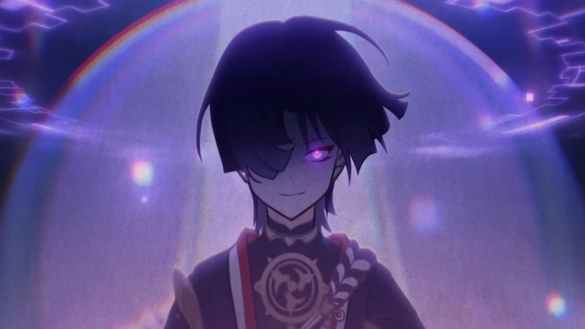 As many leakers and players expected, the new upcoming characters for Genshin Impact have been revealed. And as the title says, we’re not talking about Nahida nor Layla who’ll be the newest additions to the playable cast later this week, but about Scaramouche, now known as Wanderer.

Introduced as an antagonist for the very first story event back in Genshin Impact version 1.1, Scaramouche has since amassed a legion of fans who were instantly entranced by his exotic design and villainous personality. I mean, who doesn’t love a good villain?

His later appearances in the Archon Quests only reinforced that role of his, to the point where he’s now becoming a weekly boss in the upcoming update. So imagine the terror when leaks predicted a redesign for his playable version, which is now named Wanderer.

Wanderer, AKA Scaramouche in Genshin Impact

Major changes were made to his colors which match his newfound vision. From his grim, it’s implied that his evil goblin attitude’s still here, as losing it was the biggest fear for the self-proclaimed Scaramouche mains. He may even be the first playable character who’s not on amicable terms with the Traveler, as Childe’s pretty close to them despite his Fatui agenda.

Although the exact reasons for the changes are still unknown, Wanderer will be a 5-star Anemo Catalyst character, in contrast to the expected Electro element. Those should be made clear once we finally kick his butt during the 3.2 story quests, as it should be a direct consequence of the fight’s results.

Leakers had a few pieces of information on his kit, describing how he can “float” just like Shikanoin Heizou does in some of his animations. That’s fair given how he’ll be the second male Catalyst user in the game.

The same leaks have also anticipated his arrival, so while fans were already looking forward to it, the reaction was still very mindblowing given how quickly his Twitter reveal broke over 200k likes. And such a reveal couldn’t have better timing, as Bohemian Rhapsody was released precisely on October 31, 1975. Pretty clever from the publisher HoYoverse, don’t you think?

More content was also revealed for the game, such as the official announcement for the TCG mode and another character named Faruzan, who’s speculated to be a dedicated support for Wanderer himself.

Time will tell us more about those, and you can check out the Genshin Impact tag while waiting for it.