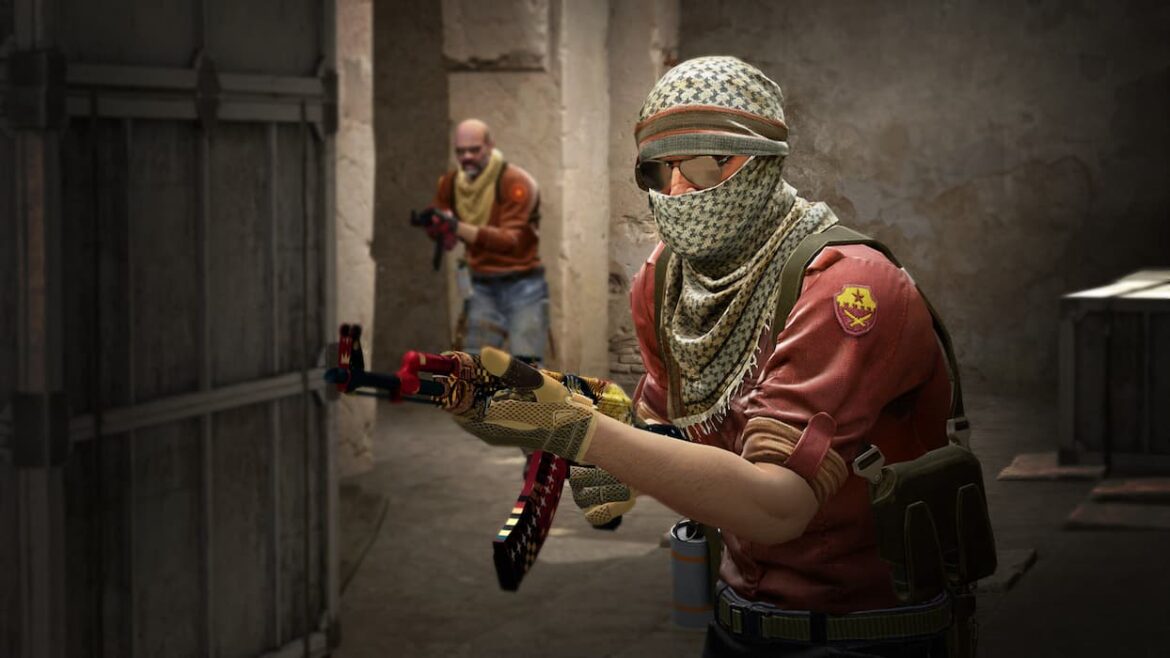 Dust 2 (or de_dust2) is the most popular map in Counter-Strike, Counter-Strike: Source, and Counter-Strike: Global Offensive. It’s so popular that some other FPS games (including Counter-Strike knock-offs) have blatantly stolen its design. It’s no wonder, really. The map has been entertaining players for over 20 years now, which is indeed a feat. This is why we are, to honor the popularity of this map, releasing this Callout guide for Dust 2 so that if you’re new to it, you can familiarize yourself with the locations within and make communication with your team as easy as possible. Relaying precise information about the enemy’s whereabouts to your teammates helps them to understand where to look for opponents.

Below is the layout of Dust II with all the relevant terms listed. In this article, we will add some info for each and mention the history of the callout, if there is any.

Where do we even begin? There are just so many spots. Let’s start with T Spawn and we’ll see where this goes.

This is where the bad guys spawn, duh. Back in the day, you could see through Mid Doors from here.

Called this because a CT can snipe you from CT Mid through the doors and you have almost nowhere to look for cover as you are running. By the time you can deploy a smoke for the doors, the advantage you would have gotten by rushing through Suicide is lost.

Called “Green” because there was a green box in Counter-Strike at Top Mid.

Top Mid is generally the area above the mid ramp. Barrels are a specific spot that’s commonly used for sniping, which can relay the info better to your teammates. Palm was there in Counter-Strike: Source, but now there’s a telephone pole around the barrels.

The probable implication is that it resembles a catwalk, with a short, narrow wall you can run on, like a cat.

In CS:GO, there’s a car in this position (it wasn’t there back in Counter-Strike) so this serves as a great landmark to relay information (and to hide for some cheap kills).

Also worth mentioning is, a “box” within this chamber, which you can boost on top of.

Pit (and Side Pit, Pit Plat)

Three parts of the Pit with a lot of camping spots available.

Most common camping spot of a CT that guards the Long Doors.

Very wide and open area, try to smoke and flash before traversing it.

Trivia: Car didn’t exist in this position in Counter-Strike.

Great hiding spot with a lot of different names. Try to sneak a boost with your friend and surprise the opponents!

The entire slope is counter as Ramp, and there’s the “box” identifier as well if you spot someone hiding behind it.

There are a lot of boxes there, but calling this location out will certainly be better than just saying “A” to someone.

One of the common camping spots as it provides a somewhat decent cover.

Open space with a couple of baskets that also serve as an identifier.

Excellent hiding spot when someone is pushing Long. Sometimes, people don’t check this spot, and a lot of the time, Ninja defuses have happened. Because Ts sometimes do not leave the site and they defend short from there, it’s possible to sneak up without being seen and to toss a combination of a smoke grenade and flashbang grenades to open the possibility of doing a Ninja defuse.

Technically, Short is Short, whether it’s before or after the stairs. This is why some people have split it into “CT Short” and “T Short.”

There’s also a “Box Stairs” or “Boost Stairs” location (which does wonders against Lower Tunnel). Also, make sure to check under the stairs as a lot of people just don’t see the enemy crouching there.

The AWP Shooting Range. What else do you need to know?

Doors that are made of sturdier material, prevent CTs from getting shot through the doors early.

Few nasty corners where someone can camp and get cheap kills on people who are entering through the Mid Doors.

A lot of things have changed on Dust 2, but this part’s construction was never finished. Use it well while it lasts!

The key point for offense/defense of B site, often a subject to Molotov Cocktails and Smoke Grenades.

Boxes outside of B Doors towards the ramp (CT Spawn) that are important to note as they are a common camping spot.

While Car didn’t exist in the original Counter-Strike, it’s a very viable spot to place yourself when you’re defending B.

It’s that pesky hiding spot that you must check every time when you’re pushing in, because every time you don’t, someone from that angle will come out and kill you. It’s also difficult to check it if you’re pushing in alone because there are so many other spots that enemies can hide in.

Biggest Box on B Site.

The back end of the (we)B Site (we couldn’t resist a programmer pun). Take note of the “Under B Window” spot which is a common camp/plant spot.

Default Plant is located right by the B site wall, under the boxes that are under the B Window.

One of many hiding spots on B Site which you must check when pushing in.

The very corner left from the Upper Tunnel exit from B Tunnels.

Upper Level of Tunnels. There are some pillars and boxes and, of course, Stairs that you can use as identifiers.

Called “Dark” before because the brightness was so damn low. Also, the location where most of the knife kills occur. There’s a big box in the Lower which you should take note of.

The entire zone under T Ramp and T Plat. If you’re rushing as CT, be careful.

One of two ways that Ts use to go directly towards Upper Tunnels from T Spawn.

That’s it for this map! Make sure to check our other CS:GO guides under the game tag below. As a thank you for surviving until the end, here’s a meme callout map we’ve found: