All Changes to Genshin Impact TCG in 3.4 - Prima Games
Tips

All Changes to Genshin Impact TCG in 3.4

More cards and more nerfs for everyone 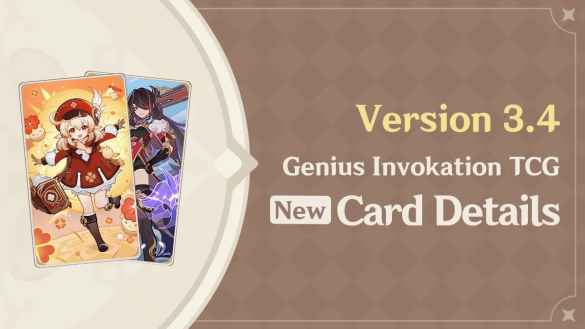 HoYoverse promised that the new card game mode introduced to Genshin Impact would receive regular updates. Well, here they are. The 3.4 version is now introducing the first few changes to Genius Invokation TCG, and they are surprisingly quite positive for the game’s environment.

Not only are new cards being added, but a few balance changes are also being introduced into a few cards to keep them from stomping the whole metagame (sorry, Yoimiya, you just can’t have a win that easy). We’ll talk about all of them here.

All Updates to Genius Invokation TCG in Genshin Impact 3.4

It’s not the time for the announced big update to the game yet, but we got a few changes that are very welcomed to the game.

The first and most important update is the new Character cards introduced in this update: Klee and Beidou. After this update, both girls can be invited to The Cat’s Tail, and their cards are awarded by defeating them in a match.

The Fleeing Sunlight, also known as the most dangerous weapon of destruction in the game, got her own card which mimics her own gameplay by introducing a Charged Attack mechanic and leaving explosives in your opponent’s side of the field, opening windows for swift knockouts.

On the other hand, the Uncrowned Lord of the Ocean got a very defensive card that can be combined with other Shield generators such as Noelle to win in a slow-but-reliable strategy, or simply used to proc Electro-related reactions with her Burst.

Related: Dehya and Mika Bursting Into Action in Genshin Impact 3.5

A few character cards were hit hard with the big nerf hammer, but not enough to actually disappear from the game. Below are all the different interactions we got now in the game.

Yoimiya and Maguu Kenki were bonked the hardest. Yoimiya’s cost now makes most of her previous one-shot decks a lot slower than they were before, while Maguu Kenki will now struggle a little bit more for scoring those perfect numbers to knock one opponent out.

Collei also suffered a little bit with the reduction of the Catalyzing Field duration, which is her main purpose on decks. Her personal Talent Card also has an extra cost now, but she’s arguably still in a better spot than her fellow nerfed cards.

And finally, Minty Meat Rolls received a small buff, making decks that rely on Normal Attacks a little bit better. Yoimiya Decks usually run these, so it might also be another compensation for the nerf.

And that’s about it! The game has amassed a small but dedicated community of theorycrafters and players who are constantly organizing their own tournaments, so it won’t seem like the game will be dead so soon. Let’s see what the future holds with the big updates coming up.