You got mechs, you got a big beefy lion boy, you got a succubus, you got... Ryu and Ken I guess 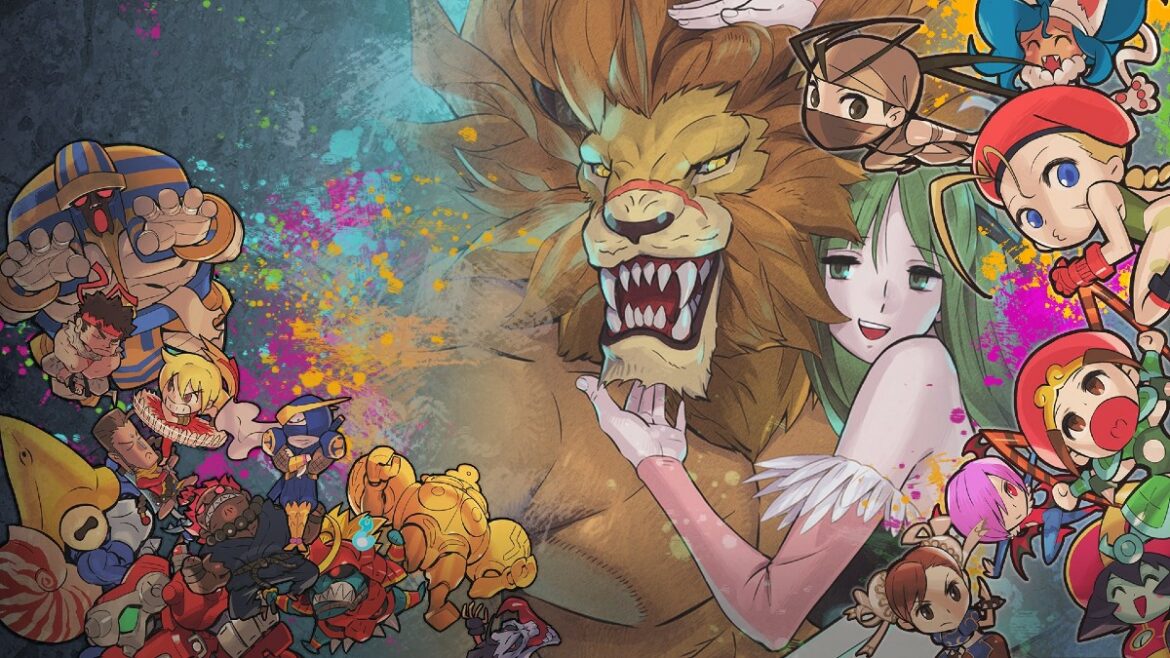 I don’t really understand this release. At the same time, it’s pretty dope and I’m glad it exists. Somehow, Capcom was able to gather up its Island of Misfit Toys, sprinkle some Street Fighter on top, and call it the Capcom Fighting Collection. That sounds prestigious as hell, but this is by no means a complete record of Capcom’s non-Street Fighter (or Marvel to be generous) fighting games. Instead, it’s a set of relatively niche games dominated by several versions of Darkstalkers 3.

Capcom has struggled in the past in trying to find a foothold for Darkstalkers in the modern day FGC. An HD collection of sorts was released for the PS3/360 to gauge interest, and it flopped. There was a PSP game that came with a single player gimmick mode, and almost everything else was Japan-exclusive. It’s almost like a second shot at getting somewhere with Capcom’s monster mash, but disguised with clever branding.

I don’t think that’s actually the case, but it sure does feel that way looking at the game list. That said, that manic, deep cut Darkstalkers energy spreads out to the whole list, including games like Cyberbots: Full Metal Madness, Super Gem Fighter Mini Mix and Red Earth. You don’t see these games very often, so Capcom sliding them in here and using Super Puzzle Fighter II Turbo and Hyper Street Fighter II as bait is a brash, yet understandable move.

Red Earth is really the star of the show here, as this is the first time that game has been officially re-released since its arcade debut back in 1996. Red Earth is a brilliant game, a strange hybrid between the RPG systems of Capcom’s Dungeons & Dragons brawlers, and the muscle of the CPS3 arcade board (which Red Earth introduced, dropping a few months before Street Fighter III). It’s a fighting game that encourages multiple playthroughs, with a leveling system adding new moves for characters over time, hidden equipment upgrades, and multiple endings.

Technically, yes, Vampire Hunter 2 and Vampire Savior 2 were never released outside of Japan, as individual games with those titles. But the content these games provide was. See, these two games are different iterations of Vampire Savior, with gameplay tweaks and weirdly split rosters. Hunter 2 drops the new characters from Savior to bring back the Revenge characters they replaced, while Savior 2 retains the new roster. Hunter 2 also drops Savior’s soundtrack for Revenge’s.

Weird, right? This mess gets further muddled by home versions, the one we got in North America being Darkstalkers 3 for the PlayStation. That version takes all three versions of Vampire Savior and smashes ‘em together, offering the complete roster and various options for gameplay. Being a PS1 title, though, you’re dealing with compromised visuals and performance.

Capcom Fighting Collection is like the Street Fighter Anniversary Collection, which collects just the arcade versions of these games. But the developers add console-style features such as online play and training modes on top, effectively giving you the optimal fidelity without the limits of straight arcade emulation. So yeah, it’s a sort of Catch-22 for Vampire Savior. Having each game offered individually is awesome from a historical perspective, but from a player perspective, it’s just confusing.

You know what else is confusing? Offering options like Japanese versions and poorly labeled screen filters mimicking different kinds of arcade monitors and scanlines. But that shit’s dope so I was excited to fumble through it all. I also appreciate these games including “coin” buttons for when the odd use case shows up, but has all the games set to free play. It’s the little things that matter.

If this review felt scatterbrained to you, welcome to the inside of my skull! There’s a lot happening with Capcom Fighting Collection, much of which won’t be appealing to the average fighting game fan. It’s kind of the opposite of Sonic Origins weirdly enough (sure is convenient to have these embargos lined up!). Sonic is interested in being a breezy, easy, no thinking or tinkering experience, and CFC is the opposite end of the spectrum, maximally appealing to the Sicko Section.

The Sickos need love every now and then. Capcom Fighting Collection is a weird, wonderful compilation that never would’ve existed ten years ago. And at the very least for the broader fighter audience, Red Earth is cool as hell and arguably worth the price of admission by itself.