I should watch this show probably 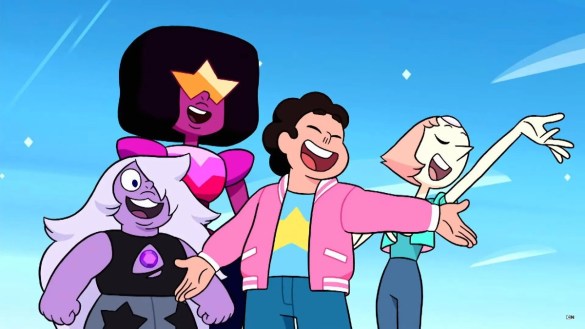 Last year, MultiVersus’ official soundtrack was finally released as an album. You can check out the album on various services for streaming, like Spotify or Apple Music. It’s also purchasable of course, and there are official YouTube uploads to round everything out. But there was a glaring omission on all of these formats. Sky Arena, the arrangement of Steven Universe’s “We are the Crystal Games,” has been absent. This tragedy is now being rectified.

The official MultiVersus channel on YouTube was finally updated with a high quality version of Sky Arena. This track is a real banger, and one of the most recognizable earworms on the whole soundtrack. So much so that when the soundtrack was released, more people were bemoaning the lack of Sky Arena than they were noticing the potential teaser for future new content. This news isn’t all good, though.

While Sky Arena is on YouTube, it hasn’t shown up on other services yet. The official MultiVersus soundtrack on Spotify hasn’t been updated, and it doesn’t seem like Sky Arena has been uploaded as a single or something yet either. There’s no way to know for sure of course, but I’d assume whatever held Sky Arena back in the first place is also why it isn’t on streaming services beyond YouTube yet.

You can totally listen to the original song though, which is great too! I haven’t even watched Steven Universe before (and frankly I hate that kid’s guts in MultiVersus), but We are the Crystal Gems is definitely GOAT material for cartoon theme songs. There’s a reason it’s the most memorable track in this game.

Hopefully we’ll see this trickle out to other platforms in due time, but for now the official YouTube upload is as good as it gets.