No, I didn't try the motion controls 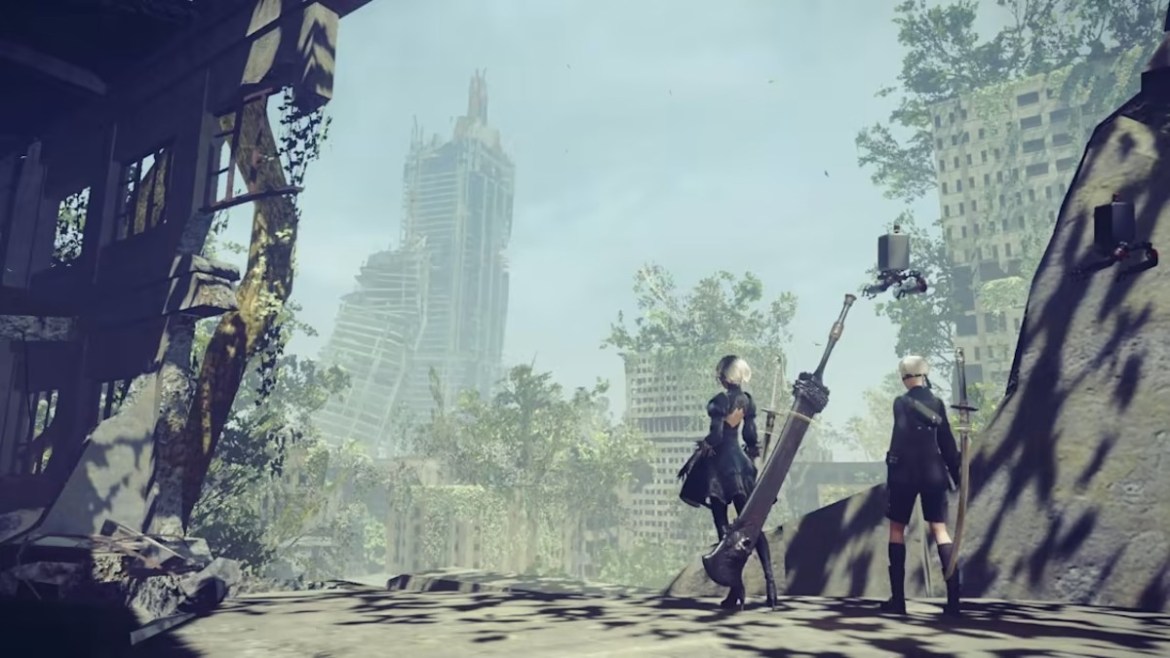 I thought the writing was on the wall with the Switch, folks. With so many struggling exclusives and Cloud Versions taking over, I figured we’d be seeing fewer and fewer ports. Surely, I thought, the days of the “holy shit, this port” headlines were over. The glory of DOOM and Rocket League far behind us, replaced with more dour reports on Shin Megami Tensei V and Rune Factory, uh, 5. Maybe the number five is just bad luck. After all, the Switch itself is around five and some change years old now, and the tech inside is even older. There’s also the whole Disney Dreamlight Valley disaster. But just as September came to a close, Square Enix stepped up to the plate and hit a home run.

The new Nintendo Switch NieR Automata port is unbelievable. I try not to be hyperbolic unless I’m being an asshole for laughs, but man. There’s some actual wizardry going on in here or something. The fact we’re talking about NieR Automata, a game that couldn’t run at a solid 60 fps on the PS4 and was nigh-unplayable on PC until Microsoft stepped in, makes this even harder to believe. But NieR Automata is going down in history alongside DOOM and Alien: Isolation as some of the most jaw-dropping console to handheld conversion work ever done.

And considering how tight a window of time this kind of work has to be notable when you think about it, this may be a permanent spot on the leaderboard. But that’s enough gushing for now. I’m very impressed by this video game software port job. But that doesn’t mean it’s perfect, nor have I bothered explaining what makes it so good. It’s time for the nerdy part. I ain’t Digital Foundry though, so don’t expect numbers and lines drawn on screenshots. Word of mouth only, that’s what you get from ya boy.

By the way I have a Switch Lite, so that’s the point of view you’re getting here. And I think it’s a valuable one considering what we’re looking at. Switch Lite is the ultimate portable version of the Switch. It has a smaller screen with more pixel density, which is the main thing that leads to one of the issues NieR Automata has. And I can’t really do things like account for TV Mode, not that anyone who has access to other platforms has any business going for it anyway. Just get the damn Xbox version if you want it on your TV!

NieR Automata targets 30 frames per second on Switch. And it hits that target comfortably, seemingly with no effort until the rare times you do hit a small dip. And because Automata is such a gracefully animated and fast-paced game to begin with, getting used to 30 compared to 60 on other platforms is surprisingly easy. It’s less speed that you’re losing, and more response. NieR Automata was already kinda flimsy in some ways compared to the Platinum greats (Revengeance, Bayonetta), which helps. But the slower refresh rate makes itself known when timing dodges in particular.

Once you adjust, it’s fine though. As someone who only recently made their way through the game for the first time, it wasn’t so bad after the initial shock. Everything else, from aiming ranged attacks to executing NieR Automata’s little baby combos, felt on point. The biggest hurdle is all the time this game spends zooming out and asking the player to take in lots of small moving parts at once. On such a small screen, it can be tough to digest everything going on when the camera zooms way out.

Aside from fighting the urge to squint at times, NieR Automata looks incredible on that little screen. There’s obvious visual downgrading to make everything run as well as it does, but it’s so much less significant compared to other Switch games that look like they’re covered in dust or something. Automata remains as sharp and full of contrast as I remember, so I can only imagine it’s quite a looker on the OLED model. You really have to study the image to discern the losses, which is something you can’t say for lauded Switch ports like DOOM or The Witcher 3.

After all this, it should come as no surprise this work was done by Virtuos, a company that has been the muscle behind several well-received Switch ports. Square Enix already worked with this team on the likes of Final Fantasy X and XII. This company is also responsible for games like Spyro: Reignited Trilogy, BioShock, Dying Light, and Dark Souls being playable on Nintendo’s handheld. Hell, even the far too ambitious Outer Worlds port is commendable despite its shortcomings. But NieR Automata is easily some of Virtuos’ best work by a longshot.

If you’ve been eager to see a NieR Automata Switch port but have been justifiably apprehensive about it at the same time, you can breathe easy. This game is portable now with what seems like the bare minimum in compromises and is every bit the remarkable experience it should be. Sure, there are technically more powerful versions out there. But you and I both know you aren’t considering NieR Automata on Nintendo Switch looking for top-shelf fidelity and performance. You’re looking for that extra dose of dopamine handheld heads get from having console-tier games in their hands. And as one such sicko, I can happily recommend this one.

It’s nice to know this little machine can still surprise us.