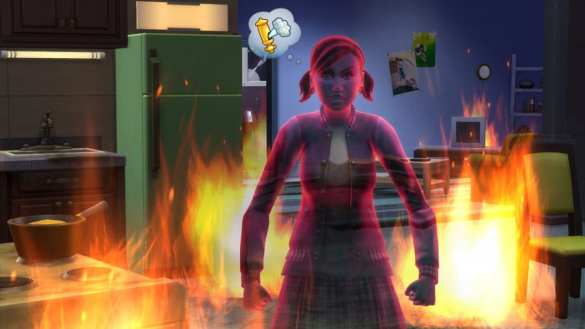 Ever since wants and fears first appeared in the Sims franchise back in The Sims 2, their behavior has differed slightly in The Sims 4. The Sims 2 had wants and fears slots you could reroll, Sims 3 skipped the system entirely, while The Sims 4 has some peculiar mechanics. However, some people don’t want their characters to have fears, which is now possible thanks to a recent update. This wasn’t always the case, though, and I’ve got some personal tales to share about why I’m so happy about this new Sims 4 update and what it means for my Sims’ quality of life.

If you’ve been playing The Sims 4 for a while now, you may be all too familiar with dreaded fears like the Fear of Dead-End Jobs or Unfulfilled Dreams. These both frequently appear, mainly if you don’t consistently fulfil your characters’ wants or if they’re unhappy at their job. These fears alone make many people want to turn off the feature altogether. When you combine these with the fear of death, the dark or fire, they can make for some wacky adventures that can make things hilarious or aggravating.

Related: The Sims 4 Wants and Fears Guide: All Fears and How to Get Rid of Them

The best part? For the longest time, we didn’t have a choice of whether to deal with these. The option to turn them off didn’t work, so we had to learn how to get rid of our Sims’ fears. The game unintentionally got a little realistic here. Fortunately, that has now changed.

Related: How to Get Rid of the Dead-End Job Fear in The Sims 4

A new update in The Sims 4, released a few days ago on January 17, added various quality-of-life fixes to the game, with one of the most significant being a bug fix for the Wants and Fears function. Now, when you enter your game options and disable wants and fears, they’ll actually turn off! You won’t have to deal with fears ever again, allowing you to live life however you’d like.

There’s one catch, though: this also disables wants.

Those little bubbles near your character’s head telling you that your Sim wants to listen to music, level up in a particular skill, or WooHoo in a bush are all wants, and they’ll disappear if you turn this off. This raises the question of whether it’s worth it to lose a consistent source of aspiration points and happiness for your Sims to get rid of their fears with the press of a button.

Honestly, I’m still disabling it for a bit.

The Joys of No Fears

I’ll admit it. It feels a little overpowered to get rid of my Sims’ wants and fears and completely control them. When I thought about it, though, it gets overwhelming at times to deal with these fears when you have multiple people in one household. I spent some time away from the Sims 4 for a few months, and after returning and playing a four-person playthrough, I was immediately bombarded with fears of the dark, dead-end job and death within about 10 minutes. I usually thrive from these challenges, but I wanted to sit back and relax after not playing for a while.

Related: How to Overcome Fear of Death in The Sims 4

Speaking of the fear of death, this one is fascinating to me. While my world doesn’t lack older Sims, my autonomy settings often find me in spots where elderly Sims pass away, leaving me with fewer to talk to. Thankfully, ones that initially started as adults eventually turn to elders, but there’s a time when, for a while, I find very few to chat with about the fear of death. In situations like this, I either look around for a bit or load in a gallery household. Regardless, these are moments where I’ve debated turning off fears just to save myself some time.

Fears and wants in The Sims 4 are an interesting way to spice up the game and add some challenges. Shortly after the initial update was released, I kept fears and wants disabled for about 30 minutes before turning them back on to see firsthand the impact. Within ten minutes, one of my Sims gained the dead-end job fear. Fears and wants, in general, have a lot of mixed feelings from people, including myself, so it’s great to have a choice now.

Now, if you’ll excuse me, I’m going to revamp my bathrooms.

Related: Everything Added in the Bathroom Clutter Kit in The Sims 4

The Sims 4 is available on PC, Mac, Xbox One, and PlayStation 4 through the official website. If you’d like to learn more about the game, check out How to Add a Sim to a Household and How to Find Lost Homework in The Sims 4.