And I'm only half way done. 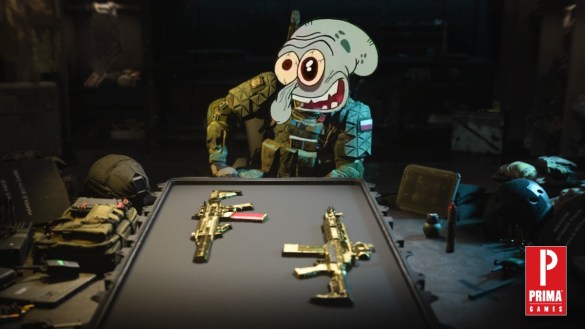 The hardest part of the Orion camo grind is over for me and I finally took out all the main hurdles in the journey. I unlocked every Gold weapon camo that you can get in Call of Duty: Modern Warfare 2, and though the grind is much more linear this year, that didn’t stop many of the steps from being a new form of torture.

Many of you are also grinding the Gold weapon camos in MW2, and as you may know, this is the longest part of the process. Some weapons, like assault rifles, are an absolute breeze that can be done with one hand on a bad day. But some of these weapons I never want to touch again. I might just turn into Squidward on his day off.

What are the Worst Weapons to Unlock Gold Camo for in MW2?

While the Orion mastery camo is still super rare to have, despite some content creators getting it fast, players are all over the place in their own progress. I unlocked gold for all 55 weapons in the game shortly after the Season 1 Reloaded update went live. Well, that update made Riot Shields an especially awful process to take on.

Before the update, I called for a nerf to Riot Shields. I still stand by that, but I should’ve been careful about what I wished for in the moment. In Season 1 Reloaded, Riot Shields are not just slower overall, but they take three hits to kill enemies. Listen, I wanted the speed and throwing knife capability to go down, but three hits are a lot. To earn gold on the Riot Shield, you must level it up, get 40 kills, then earn two kills without dying 10 times.

My saving grace was the addition of Shipment 24/7, and even then, getting those two kill streaks was the worst challenge in the game. Getting three hits to kill an enemy is only one part of the challenge. What really makes it fun is trying to get those kills before a teammate takes the kill. And I promise you; they certainly will.

After the Riot Shield, the JOKR is undoubtedly the worst weapon to get to Gold. It’s terrible to level up, and managing to pull off the lock on before you die is a blessing. On top of that, you’re essentially praying for each kill as the rocket takes 10 years to fall down. Unlike the Riot Shield, I had the JOKR done before Season 1 Reloaded, so there was no Shipment in sight. All I had was my almost broken will to keep getting through these camos.

Before Season 1 Reloaded, my final straw may have been the Shotguns. Both of the Bryson weapons are just terrible beyond 10 meters, and they are super inconsistent. They have four normal camo challenges like all the other normal guns, and then 10 three kills streaks are needed for gold. Getting those streaks and the mounted kills was its own challenge.

Tips for Getting Every Gold Weapon Camo in MW2

Now that I’ve finished this leg of the race, I can offer advice to those still going for the Gold camos themselves. The good news is that even after some exploits were removed, the grind became easier after the recent update.

Most of the other weapons in Modern Warfare 2 are fairly straightforward. They all have four challenges, and in my opinion, the mounted ones are some of the worst. The MCPR sniper rifle has a hip fire challenge which is also especially torturous, but most aren’t like that. You’ll spend a lot of time simply getting hip fire kills, crouched kills, prone kills, and so on. Nearly every weapon will also require 10 three kills streaks to earn the Gold camo itself.

What makes this leg of the race so long, though, is leveling up the weapons themselves. To unlock the Gold challenge, you need all four base camos done, which requires one or two levels under the maximum for each weapon. Some guns have only 16 levels, while others have nearly 30. Considering you need 51 Gold camos to unlock the Platinum step, you’ll need plenty of XP, and Double Weapon XP will be your savior.

How can you make the process easier, though? For starters, you can now skip the launchers. With four Modern Warfare 2 DLC weapons in the game, you can get each of those to Gold instead of the launcher category. All four weapons are great to use, so it’s not a bad idea, but the completionists won’t like that.

You’ll also want to spam Shipment 24/7 if you want to save time in MW2. You can easily get 2-3 levels on a Shipment 24/7 match without any XP boosters. The hardest part will be getting those kill streaks on such a small map, but with so much chaos, you can always get quick streaks before anyone even realizes they spawned. Almost all of your weapons should be a breeze in this playlist if you can put in the time. But be prepared for the Riot Shield. At this point, there really is no easy way to check that one off the list unless you want launchers instead.

After so much time spent grinding through different camos in Modern Warfare 2, it’s now time to go for Platinum. This time I’ll be sitting right in the Tier 1 playlist, and we’ll see how that compares to part 1.