Who is Angrboda in God of War Ragnarok? - Answered - Prima Games
Tips

Who is Angrboda in God of War Ragnarok? – Answered

Atreus' rules for romance: threaten her with a knife. 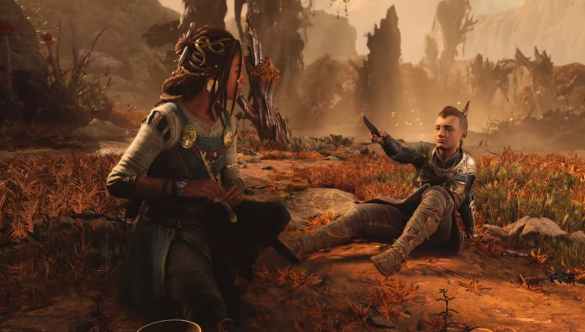 While the first glimpses of Angrboda were revealed in 2018, God of War Ragnarok lets players meet Angrboda for the first time. Here’s everything we know so far about the character but, be warned, there will be ample spoilers ahead.

Who is Angrboda in God of War Ragnarok?

Angrboda is a Jotunn, one of the last living members of the race of giants. She’s socially awkward, but that can be forgiven, as it’s been a long, long time since she’s spoken to anyone last. In that time she’s been in the Ironwood, The Forest of the Giants, where she’s kept her mother’s mosaics of the future safe. She’s also the granddaughter of Gryla, another giant you’ll encounter.

Based on her mother’s visions of the future, she’s been waiting for Atreus, or Loki, to arrive. And when he does, she fulfills what she believes is her responsibility: revealing to him the rest of the mural Atreus saw at the end of God of War in 2018 and passing on the marbles her father created. These marbles aren’t just your ordinary marbles, however. They’ contain the slumbering souls of the last of the giants. How lonely, to be the last guard for so many years.

Related: How to Fix Stuck on ‘Queued for Copying’ Error in God of War Ragnarok

But it’s clear that Angrboda struggles to understand her place in the prophecy her mother painted. Is she merely a chapter in Loki’s life? Does she even have the power to influence the story she’s a part of? These are existential questions that have haunted Angrboda for who knows how many years. Still, Atreus and Angrboda spend some quality time, and the romantic tension is so thick you could cut it with a Leviathan Axe.

This speaks to the Norse mythology that Angrboda springs from, where she is the mate of Loki and the mother of monsters. And while God of War Ragnarok doesn’t go that far, there’s still hope for something more than flirtations in the next game.