What is the Secret Ending in High on Life? – Answered - Prima Games
Tips

What is the Secret Ending in High on Life? – Answered 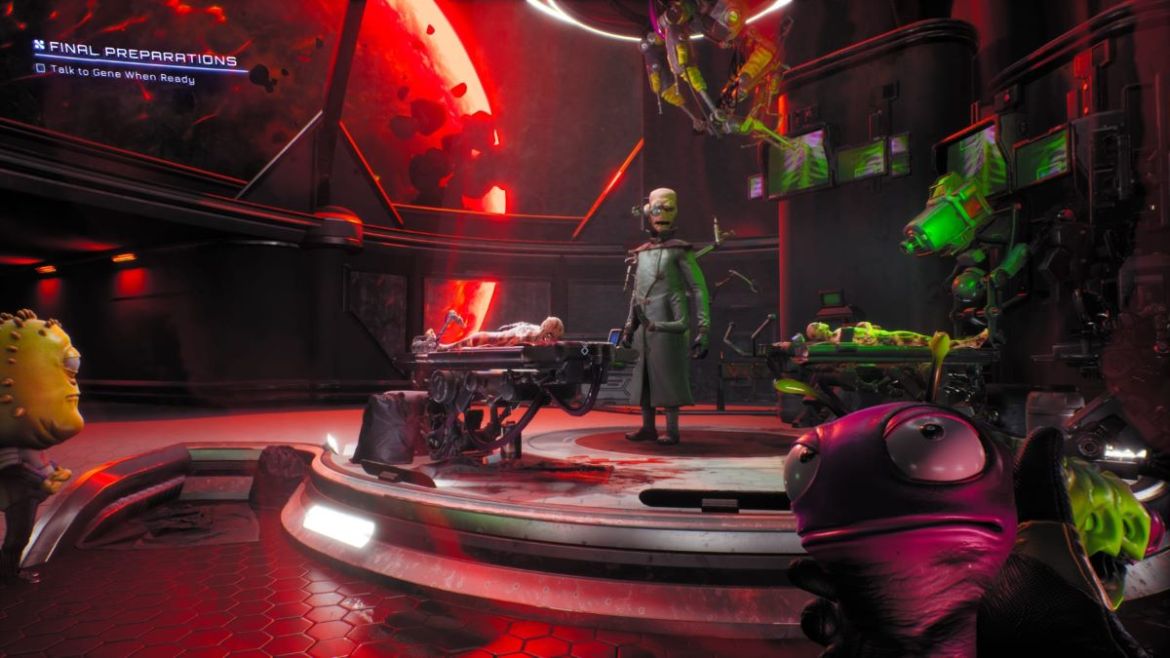 If you’ve ever wanted to be humanity’s last hope against a drug cartel that’s dead set on capturing all humans and turning them into something you can smoke from a Hyperbong, High On Life might be the game for you. You play as a silent bounty hunter and perpetual disappoint to your parents, and it is your mission to defeat every cartel boss the game can throw at you. While you do so, you’ll periodically see humans trapped in cages, waiting to be turned into drugs. But if you interact with them, Mayor Clugg of Blim City will teleport them into a place called Human Haven.

You can even visit Human Haven if you want. It’s accessible in your Portal Menu in the Bounty 5000 as an “Unknown” location. Head there, and you’ll find that you’re in a vaguely grey, sterile room with a handful of humans hanging out in jumpsuits.

But doesn’t it seem… vaguely ominous? There might be more to explore here than meets the eye. And it’s this location that will be the source of the Super Secret Ending of High On Life.

What is the Secret Ending in High on Life? – Answered

Once you’ve obtained the Human Haven Keycard, you can teleport back home to the Human Haven. There, you’ll need to jump on the central structure, the one that says, “Do Not Climb”, and platform all the way to the very top. You’ll know you’re getting closed because you’ll see some flickering red lights.

Use the key card to get inside and pass the fans with Sweezy. Once you’ve fallen deep into the facility, you’ll find a gristly discovery: humans, bloodied, dead, and dissected. The Human Haven has been nothing more than a cattle hold for something far more nefarious.

Slipping through the doors, you see more humans in the next lab room and a familiar face. Mayor Clugg stands over a body, inspecting it, and is terrified to see you peering at him through the lab window. He runs off, but you give chase, following him into a glass dome bathed in the red light of some hellish planet. There in the room’s center is an operating table and a tall, multi-armed alien.

This is Dr. Gurgula, a scientist and brutal pursuer of the universe’s secrets. Dr. Gurgula kills Mayor Clugg for his incompetence in leading you, the bounty hunter, straight to his operating theater. Then Dr. Gurgula begins speaking to you directly.

It’s clear that he doesn’t view you as a threat at all. Instead, he reveals precisely what he’s doing: he’s attempting to unravel the universe’s secrets and has been dissecting and examining alien species for years in pursuit of that. The pestilence that destroyed the Gatlian planet was his doing once he realized that the Gatlians weren’t the answer to his problem.

Now Dr. Gurgula has turned to humans believing that their unique brain structure might be what he needs to progress his research. He shoos you off, telling you to kill the G3. You’re just part of his schemes, and as much as you hate it, you have no choice but to obey. After all, the G3 is still intent on turning all humans into drugs.

Dr. Gurgula teleports away, but not before deleting all his research. All you’ve learned is that the real enemy is much bigger and more sadistic than the G3. But we won’t learn more until the sequel.

Platform all the way to the very top. Follow the creepily blinking red lights. Eventually, you’ll reach a door that says, “No Trespassing.” Use the keycard that you stole from Clugg, and… I’ll leave it to you to see what’s behind the door.

But congrats on unlocking the Sequel-Bait achievement, worth 45 gamerscore!