How to Stop the Fans in High on Life

Freeze time and punch a sentient treasure chest in the face 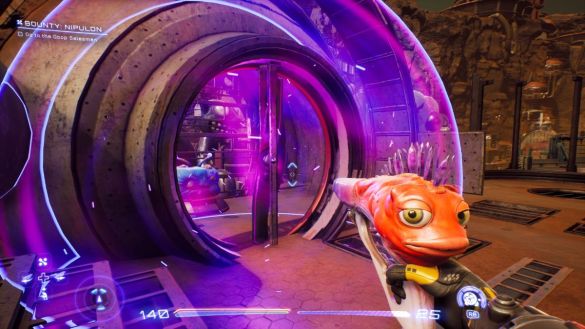 High On Life is a comedy sci-fi shooter that makes you, a high school graduate and constant disappointment to your parents, Earth’s last hope. It’s a dire state of affairs, but an intergalactic drug cartel has set its sight on Earth, and you, with the help of a sentient gun called a Gatlian, must take down all of this cartel’s bosses and free humankind. But you’ll face many obstacles along the way, from grunts to environmental blockages.

One of the earliest environmental obstacles you’ll run into are fans. They’re practically everywhere and you’ve likely seen a Luglox, an alien that keeps tons of cash in its body, right behind one.

Here’s how you get past those blades and get to that treasure.

How to Stop the Fans in High on Life

Kenny, your sidekick and Gatlian, has something called a Glob Shot. You’ve likely used it to help you traverse the Slums, getting you to resident Mob Boss 9-Torg. Gatlians are the primary way you’ll solve all puzzles in High On Life, and it’s the answer to our fan problem.

By selecting Douglas’ bounty at the Bounty 5000, you’ll head to Dreg Town. Dreg Town is where we’ll find the Gatlian that will make fans easy-breezy. Unfortunately for us, Dreg Town, which is settled at the bottom of an asteroid, isn’t particularly friendly to bounty hunters. It’s a center of G3 recruitment, and once they get wind of the fact that you’re trying to kill their boss Douglas, you’ll have to fight through waves of these new recruits to get to them.

But kill enough of these yellow-suited dorks and solve a few pipe puzzles, and you’ll finally enter Douglas’ arena. The fight against Douglas isn’t particularly easy, but bring him down, and you’ll get to claim that Gatlian he’s had in his possession – Sweezy.

Sweezy is one of the best Gatlians in the game so far, not only because of its ability to fill enemies with crystals and shoot through walls but because it can stop time with its Glob Shot. This creates a small bubble, and everything within it is slowed. Enemies and environmental obstacles, like fans. Or cars. You should try stopping a car.