How to See Enemy Targeting in Fire Emblem Engage

I honestly just came here to have a good time… 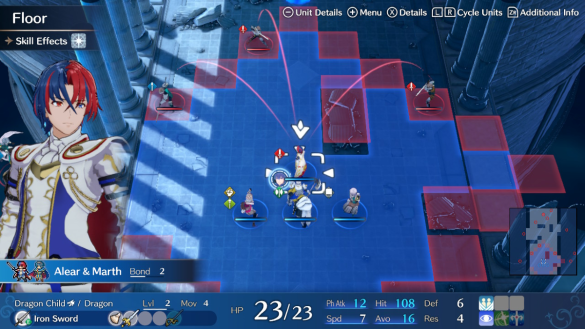 Similar to the style that we have seen in Three Houses, Fire Emblem Engage has an introspective system that allows you to plan around where enemies might attack while you are planning out your moves for that round. While not guaranteed that that enemy will for sure target the unit it’s indicated, you can rule it out by process of elimination. Fire Emblem’s turn-based system has always operated as a sort of chess game in maneuvering your unit, but paying careful attention to the enemy’s weapons, movement, and where their marker indicates should help you figure out what is a safe move to make. Here’s how to see Enemy Targeting in Fire Emblem Engage.

Related: How to Claim Order of Heroes Item Set in Fire Emblem Engage

How to See Enemy Targeting in Fire Emblem Engage

Just like in previous games, you are able to track where enemies are going to go by hitting ZL. This will highlight the entire map of how much room each enemy is going to be able to reach with their individual movements. You can also track certain enemies by clicking them with A and it’ll highlight them as a different color on top of that. Usually, it’s really helpful to either track the archers on the map to protect your flying units or the flying units to keep a track of how much they can move. Bosses of each map often won’t move until you approach closer to them so you shouldn’t ever have to worry about tracking them until you’re in the valid range of their attacks.

What has followed Engage from Three Houses is that trails of redlines will flow from the enemy to the character when you activate your unit to move them around the map. While this won’t entirely predict that the enemy will for sure attack you, it is highly probable if there are no weaker units in your party near them or other units that are weak to the enemies’ equipped weapon.

These tracer lines help to see what enemies are on the field and how many could potentially attack you whenever you make a move on the board so you don’t regret any later decisions. Be sure to keep an eye out for your enemies and what weapons they have and the game will be a much easier playthrough for you.