How to Find and Pet the Mechanical Dog in Destiny 2 Operation: Seraph’s Shield - Prima Games
Tips

How to Find and Pet the Mechanical Dog in Destiny 2 Operation: Seraph’s Shield

I would die for him. I would kill for him. Either way — what bliss. 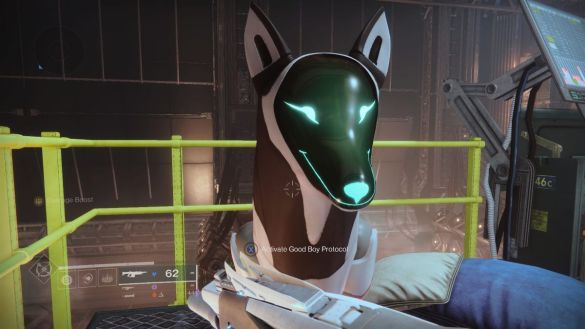 Season of the Seraph might be one of the best seasons Destiny 2’s released in a long time, and that’s for one reason: they’ve given us the chance to get our very own dog. Yes, embedded deep in Seraph Station, is a robotic dog that is desperately waiting for someone to activate its Good Boy Protocol and bring it home.

But getting to this pup is harder said than done. You’ll need to obtain 50 Drones scattered across the universe (12 of which are in Seraph Station) and have Security Clearance. But if you’ve managed to obtain all of that, you’ll be able to open the door and navigate the maze that will lead you to our robot dog.

Here’s your guide on how to do just that in Destiny 2.

How to Find and Pet the Mechanical Dog in Destiny 2 Operation: Seraph’s Shield

To find the door that allows you to access the dog’s maze, you’ll need to complete the space walk on Seraph Station and get past the room with two ogres. In the room where you’ll face Haroktha, Scourge of the Helium Drinkers. This is the Hive boss that initially fled when you first tried to fight him.

Defeat him and then turn to the door on the side of the room. If you’ve obtained all 50 drones, the circles on the panel to the left of the door should all be lit up.

Enter, then pass through the laser wires using whatever method you have. Icarus Dash, Swords, and the actual Infiltrator Armor you’re meant to buy from the Exo Frame are all options.

Once you’re past the lasers, you’ll enter a small server room. Use your Security Clearance to access the console, and three panels will spawn. Two will spawn in the room with you, but the third is very tricky and has stumped many people. You’ll have to leave the room to find it.

Once that’s done, the door will open, and you’ll be able to access a transmat pad that will take you to the Maintenance Substructure. This is the maze that we’ll have to navigate to get to our dog.

From the platform you arrive in on, look down and to your right. There is a narrow ledge that’s marked with red lights. Jump down to it. You’ll need to jump up briefly to access the platform that’s right in front of you, then walk down the end of it.

Turn left, and you’ll see a distant platform against the far wall. It might not look like it, but you can definitely make this jump without any special equipment. Do so, and walk to the end of the platform, where you’ll encounter a tube that seems to be pumping liquid space.

You might be tempted to jump through the gap between the tube and the wall. After all, there’s a platform there. But that is the wrong path. Instead, you’ll need to make a leap of faith, going around the pipe. There will be a large cylinder platform that you can land on. But only stay here briefly, as its top will spring open periodically, sending you flying.

From the top of this large cylinder, you’ll see two stacked pipes right in front of you, a fair distance away. You’ll need to jump and land on them.

Once you’re on these stacked pipes, you’ll want to jump forward and left towards more transparent pipes that are pumping that liquid space. Follow these pipes right, and you’ll see a large cylinder jutting from the wall. If you look carefully, you can see a turret right beneath it.

Our goal is to land on that large cylinder, then land where that turret is. Kill the turret to make this process easier. Once you’ve managed to reach the turret’s platform, you’ll see a door in front of you. Jump for it.

This next section is straightforward. Walk to the edge of the balcony. This is a metal platform to your left. Jump there, then you’ll see there’s another platform to your right. Once you land, a turret will start shooting you from the platform you need to reach. This is an ongoing theme, isn’t it?

Kill the turret, then jump to its platform. To the right of where you landed is another platform… and another turret’ll immediately attack you. Again, the turret is sitting on the platform you’ll need to reach. Dispatch the turret and use it as a launch point to access the staggered platforms in front of you.

Once you’ve reached the highest platform (there are only two), you might be tempted to go for the pipes on the far wall. Don’t. Hidden on the wall to your right is a door. It’s a bit of a jump, but that’s where we need to go.

Head inside, and a turret’ll immediately assault you at the center of the room. Kill it, then turn the corner slowly, as there will be a hidden turret to your right. Beside where this turret was will be a slide. You’ll notice that there are two squat ‘T’s on the slide. I have to assume that T stands for trap because that’s precisely what it is.

This slide is divided into two sections. The left section will take you to safety (assuming hitting the walls doesn’t kill you), and the right side will dump you into oblivion and instadeath. But if you pick the wrong side, it’s possible to adjust and recover. Just make sure you aim for the blue room.

You’ll enter a small alcove with a platform. There isn’t much here, but if you check the side of the platform, you’ll see there’s a gap that you can enter. It’s marked by pink light. It seems ominous, especially after that slide stunt, but jump in anyway.

You’ll hit a short slide and see a pipe right in front of you. It’s possible to jump right over this pipe and land on the platform behind it. But if you’re not that skilled (I was not), it’s better to land on the pipe and then jump to the platform and save yourself a 15-second respawn.

Follow the path right, and you’ll enter a small room. There will be a door here on your left, but that’s just to trick you. There’s no way to open it. Instead, head to the right side and look down. You should see another square of pink light and another chance to throw yourself into the depths.

Do so and navigate slowly. This slide will bounce you around and injure, if not kill you. You’ll land in a small box of a room, with an opening to a corridor to your right. Do not enter this corridor while injured, as it has two hyper-vigilant turrets that will immediately begin shooting at you.

Dispatch both turrets (use your Super if you like, these are the last two turrets you’ll see), then continue down the server hall. This corridor then opens to a balcony that seems to offer nothing. There are no platforms around you. No pipes that you can jump on. Just an abyss.

But look down, using your sights. Ideally, a Scout Rifle or Pulse. There, against the wall, is a small square of blue light. That blue light is a doorway. That’s where we need to go. You’ll need to make a leap of faith and try very, very hard not to miss. Or, worse, die on impact.

Land, and you’ll encounter a short corridor and a dark room. Head inside, and you’ll see, bathed in a soft orange light, him. The dog. The one thing we’ve spent hours trying to get. And he’s so happy to see you!

Approach him and you’ll get the prompt to “Activate the Good Boy Protocol”. Do so, and you’ll unlock the Triumph, “Guardian’s Best Friend”. This is one of the cutest interactions I’ve ever seen – the dog is so happy to be pet! The absolute cuteness of this made all those hours of searching for drones and dying in the maintenance maze worth it.

The dog will then vanish but don’t worry. You’ll be able to see it again if you travel to the H.E.L.M. and go to the Exo Frame. The pup just wants to hang out with Rasputin. While the mechanical dog is in the H.E.L.M., you can activate the Good Boy Protocol any time you like.

And if you want a real-life version, you can now head to the Bungie Rewards page and buy one for yourself! It costs $30, and you only have until March 31, 2023, to buy it. And yes, you need the Triumphs associated with the mechanical dog even to get the option to purchase it.