How to Access Cutie Town in High on Life

Cutie Town is a town full of cuties and you, a giant monster 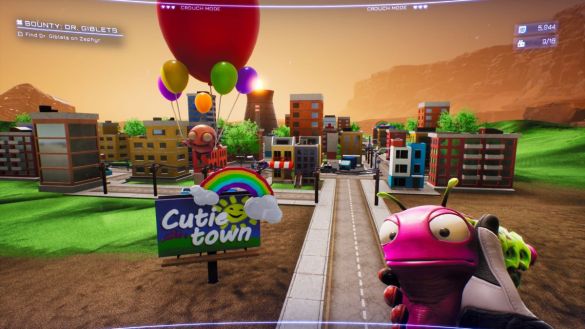 High On Life is a galactic comedy shooter that sends you warping across the galaxy as you hunt down the jerks who have enslaved your planet and are deadest on turning your species into a drug you can stuff into a Hyperbong. But in between hunting bounties with your Bounty 5000, you can also visit a handful of interesting locales that primarily offer confusion, a few laughs, or full-length movies that no one would have paid for. Cutie Town is one of these locations.

Cutie Town had its moment of fame in High On Life when gameplay footage premiered before The Game Award 2022 (at least on YouTube, sorry to anyone who watched on Twitch or other platforms). But if you want to access this tiny, tiny town, you’ll need to follow a few steps.

How to Access Cutie Town in High on Life

If you’ve been playing the game normally, you’ve likely obtained a few Warp Crystals. Warp Crystals serve one function – to pay for some of the illicit warp discs at Blorto’s “food stand.” To gain access to Blorto, you’ll need to take down the first two of the G3 bosses, Krubis and Douglas, and then speak to Mayor Clugg of Blim City.

Once you two broker a murder agreement, head outside of your house. In front of your house, somewhat to the front and right. He should shout at you if you get close to the food stand. Sit in front of him, and he’ll give you his menu, which will decrypt into the actual secret menu.

This menu will list available Warp Discs and their locations, which can be purchased with Warp Crystals. Cutie Town is actually free, so don’t worry about wasting Crystals here. Grab it, then head to the Bounty 5000. Tab into the lower menu, which will be Portals, and select Port Terrene, then Outskirts. Activate the Portal and step through.

There are actually two energy tents here, near the GMS Schlooper Wreck. This Wreck is accessible if you head forward as if you were going to Old Town. Select either one; then, you’ll be prompted to use your Warp Disc. Select Cutie Town, and the tiny Cutie Town will warp in. You can then choose to explore it.

Good luck! And try not to crush anything. Or do. I’m not your mom.