It’s like chess but with anime waifus and husbandos 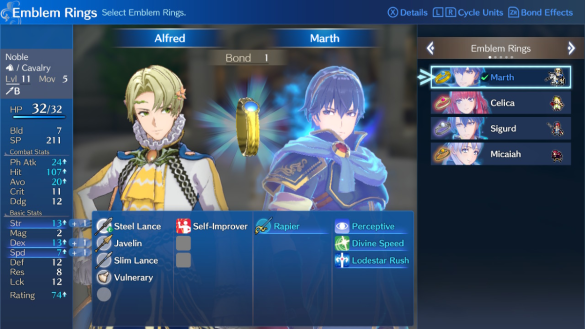 Fire Emblem has always used a turn-based RPG style combined with the tactical strategy one uses in a game of chess. Engage is no different, aside from a few more niche ideas to make the game stand out among its predecessors. Here are a few things to keep in mind when playing the game, either little reminders to returning players or tricks for beginners who are entering the Fire Emblem franchise for the first time.

Fire Emblem uses a diverse range of weapons that vary from short range to long range. The main types of weapons you are going to see for your units are going to be the sword, the axe, and the polearm. These weapons operate in rotation against each other with swords trumping over axes, axes trumping over polearms, and polearms trumping over the sword. Luckily, you don’t need to memorize these as much as long as you pay attention to the screen when you are choosing your unit to go against certain enemies in battle. It’ll indicate which weapon is weaker or stronger when encountering enemies.

There are also long-range weapons such as Bows, Martial Arts, and Daggers, but these generally have no effective or ineffective sets against weapons particularly. But you’ll notice they do still have their uses. Bows are great against Flying Units, such as those on Pegasi and Wyverns. Martial Arts are new, but they help Healer types deal with physical attacks so they aren’t ever left defenseless until you level them up with Master Seals. Daggers have been effective in previous editions for different reasons, but for Engage, they work at weakening an enemy with poison. Attacking them again with a Dagger will boost that damage.

Something to keep in mind whenever you are about to begin a battle is that you can look around the map to see what types of enemies are on the field, and what their varied levels are, and plan accordingly before you even begin.

Although it’s no longer as simple as it was, Fire Emblem does allow you to Swap units on the battlefield so that you can keep a healer either nearby or two healers if you like to divide and conquer for certain routes. You can also change units to make sure that the enemies that certain parties will encounter will be effective against upcoming enemies in their path.

It also helps to be aware of what types of terrain you’ll be fighting on, such as grasslands that allow hiding in the foliage. This will help your units dodge more attacks, but your enemies can also use this, so be aware. Occasionally, the terrain can only be accessed by certain units such as flies, so be aware of what routes you are taking.

Fire Emblem Engage allows a new feature that does not require you to have as many Door Keys anymore. Now, you can simply use units to attack wall and door partitions to break them down. Thieves are still important, since they can unlock doors and treasure chests, so it means fewer steps you have to take. But this is a nice quality-of-life fix.

Between tearing down enemies and Fire Emblem’s Online Connection Drops, you can find that your character’s inventory can fill up quickly. Sometimes, enemies will have items on their person that they will drop once defeated. In Fire Emblem Engage, you can connect online to see where players have been defeated and where players have defeated enemies on the field. Waiting in those sections of the map will gift you items or experiences.

It always helps between battles to go through a character’s inventory to clear it out, switch weapons with stronger ones, or give weapons that will benefit certain characters. You can give mini bows to Archers so they have a way to deal with close-handed combat, or you could give Hammers or Reverse Weapons that will deal damage against its opposing weapon. Hammers can be effective against Armored Units and weapons like the Poleaxe can be effective against Calvary.

It also helps to make sure enough units have Vulnerary or Antitoxins on themselves so if they are too far away from healers, they won’t die as easily and have a preventive measure against poison attacks.

One of the important aspects of Fire Emblem within its last few recent editions is managing Support and Friendship between characters. Those that fight alongside one another in battle often unlock conversations after a certain point in time. This allows for your units to get to know one another and soon in battle, they will cover each other’s backs, boost certain stats, and may be the difference between life or death.

Not all units can interact with one another, but on the field, you should be able to see the indicator that two are matched by the hearts that appear over their heads right after their turn ends. They must be adjacent to one another unless they are units like Boucheron who will cover a wider AOE to protect his fellow allies.

An important note that’s different from previous versions is that you will not be able to access these Support Options when you are in the menu just before a battle. You must be in Somniel in order to play out these conversations and boost Support.

Related: How to Unlock all Units in Fire Emblem Engage

Three Houses gave you the option of roaming around the grounds of your school and Church Seiros. After battles, Engage will open up a small area that will allow you to talk to your fellow units in the party and villagers. While talking to villagers won’t always result in gifts, you can pick up dropped items around the village or battlegrounds that can help you fill up your inventory with needed items.

Talking to your units after battle can also result in Bond Points building up from their appreciation in the previous battle. And you may just learn more about your units that will help you give better gifts to them later, or tailor certain foods to their liking when cooking is unlocked.

Another important fact about exploration is that you can adopt animals. Bringing certain animals back to the Somniel will increase the types of drops you get in your farmland, which will help you expand your cooking and gift you increasing rare drops for Fruits, Vegetables, and Fish.

Exploring around the Somniel itself will also occasionally see these types of drops throughout the map. So be sure to visit the Somniel, train, and explore the grounds for any additional items that will build up your menu and team strength.

Important things to keep an eye out for in this new version are additional boosts you can get to your main character Alear or other units by utilizing the new systems built in.

While Cooking is not entirely new, you can have meals with two units and boost your Support with them as well as with one another. Using an abundance of ingredients can often result in Leftovers which you can give to a unit just before a battle.

Note, however, that there are good and bad recipes. If your chef isn’t entirely up to the task with certain ingredients then you may just have a couple of tummy-churning units on your next battle. The recipes will have a glittering symbol next to them indicating that unit’s specialty, so this can greatly differ between success and failure for your dish. It’ll also mean that you get a higher mark for it if you choose your ingredients well. It doesn’t hurt to occasionally fail, however, since it still counts as an achievement, and achievements help get more Bond Fragments.

You are also able to Train in this version. While not quite like Three Houses, Alear will bulk up with Prince Alfred by either performing Sit-ups, Push-ups, or Lunges that can boost his Strength, Health, and Dexterity respectively. This should be effective within the next battle so it’s always important to go by and train just before you head into the next chapter or challenge.

Lastly are the skills that you’ll eventually have an overabundance of. Be sure to check your character’s special skills between great leaps in levels to make sure you are maximizing their skills before the battle. For example, if you were to switch Emblem Rings from character to character, you’d want to unlock and then equip the unique attributes those Emblem Rings bring. If Sigurd were of Alear, then you’d need to personally equip the Inherited Skills until the rest are unlocked by their Support from one another.

Related: How to Get Second Seal in Fire Emblem Engage

Leveling up the units themselves will also unlock unique skills to that specialized unit that will help them in the midst of battle. So once they unlock, be sure to equip them. You only have two slots, so be sure to manage them efficiently for the best result when you head into battle.