Fall Guys: How to Get the Terry and Mai Fatal Fury Skins - Prima Games
Tips

Fall Guys: How to Get the Terry and Mai Fatal Fury Skins

Do you want to be a ninja or a wolf? 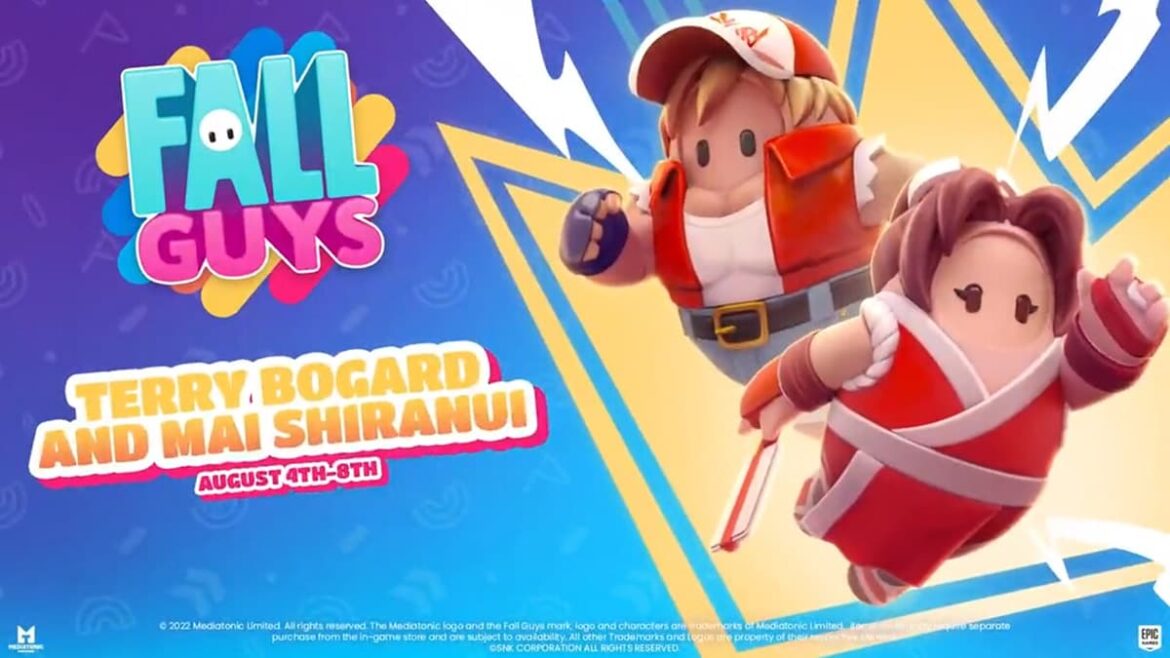 A new Fall Guys collaboration is live featuring the Fatal Fury characters Terry Bogard and Mai Shiranui! With many fans of both games eager to get their hands on these costumes, you may wonder exactly how to obtain them and how long you have until they’re gone. If you’re interested in learning more, continue reading to discover how to get the Terry and Mai Fatal Fury skins in Fall Guys.

The Terry Bogard and Mai Shiranui skins are available through the in-game store for 800 Show Bucks each. From August 4 to 8, these costumes are accessible through the featured tab of the shop. You can either spend 800 Show Bucks for each skin or 1600 for the bundle, which includes an emote and banner.

The easiest and quickest way to get Show Bucks is to buy them for real-world currency in the store. To do this, head into the Show Bucks tabs and pick any option. The lowest tier for $10 will net you enough bucks if you want to buy one costume. Similarly, if you’d like the bundle, the next level up for $25 will get you there.

Related: When Does Fall Guys Season 1 Free for All End? – Answered

Don’t worry if you don’t want to speak real money to get the skins! Thankfully, the in-game battle pass allows you to acquire Show Bucks for free by playing the game and completing challenges. Completing the entire battle pass from level one to 100 will earn you a total of 1,500 Show Bucks, which, although it isn’t quite enough for both outfits, will still allow you to buy one skin of your choice. This also means that if you’re a low level in the battle pass and have not gotten any Show Bucks yet, you can get all 800 Bucks as early as level 59.

Regardless of your route to buying the outfits, be sure to do it soon since you only have until August 8 to purchase them! The Fall Guys Terry and Mai skins are part of an exclusive Fatal Fury-Fall Guys collaboration that lasts only a few days. If you’re considering getting some through the battle pass, you’ll want to start farming soon, so you have time to get all the Show-bucks you need.

Fall Guys is available on PC, Xbox Series X/S, Xbox One, PS4, PS5, Android, and iOS devices through the official website. If you’re interested in reading more content, check out our Tip Toe Strategy Guide and Whether Fall Guys has 2-Player Split-Screen.