These weapons will carry you through anything PvE can throw at you. Unless The Architects get involved 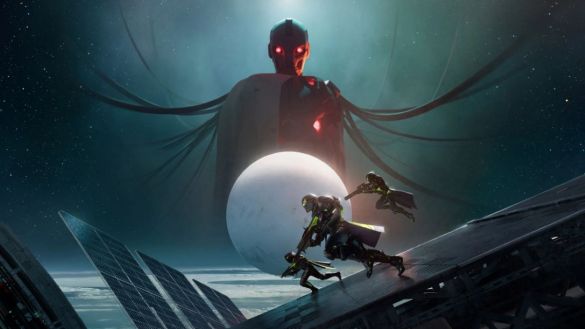 A new year has dawned on Destiny 2, and you might wonder what the best weapons are to help you mow down legions of unsuspecting Hive, Taken, and traitorous Fallen. Fortunately, this space-faring looter shooter has no shortage of weapons. And I mean that in the most literal sense. Destiny has thousands of guns, from the white-tier weapons you get when you first start your new life as a Guardian to the coveted Golden Exotics.

Plenty of these guns fall well within S-Tier for PvE content, so here are some highlights for you to consider obliterating your enemies with.

The first up on this list is No Time to Explain, an Exotic Pulse Rifle gifted to you after you complete the Beyond Light campaign. Yes, that means if you want this Pulse Rifle, you’ll need to shell out the cash for that campaign.

But No Time to Explain is an S-Tier weapon that’s fantastic in both PvE and PvP. Its intrinsic perk causes precision shots and shots against combatants slowed or frozen by Stasis to be returned to the magazine. But what’s made it a fan-favorite in both categories is its high precision and high damage combo, which allows you to melt enemies at a distance. Fantastic if you’re thinking about doing end-content or Legend Difficulty content.

This Legendary Sniper Rifle might be even harder to get than No Time to Explain, as it’s part of the Deep Stone Crypt Raid loot table. But if you nabbed this from a raid chest, you’ll have one of the best Kinetic Sniper Rifles in the game.

What makes Succession so fantastic is its high damage and its perk combination, Reconstruction and Vorpal Weapon. Reconstruction causes the weapon to load itself and Vorpal Weapon increases damage done against bosses. This means you can keep doling out damage in the limited windows you usually receive for end-game damage phases.

Shayura’s Wrath is excellent because its diverse perks mean you can build it to fit your play style. But it works best with a long-ranged weapon like a Sniper Rifle and with perks like Kill Clip and Killing Wind. With Kill Clip, reloading after a kill grants increased damage. With Killing Wind, final blows grant increased mobility, weapon range, and handling for a short duration.

If you intend to go into any raids in 2023, Divinity is going to be an extremely useful weapon to have on hand. But to obtain it, you’ll need to complete the Shadowkeep’s Raid, Garden of Salvation. It makes sense that the best weapons in the game are all locked behind difficult, end-game content.

The reason why Divinity is so beloved by raiders is that it weakens enemies by 30%, and it expands the boss’s critical-hit zone, making it easier for your team to land higher damage shots. As you can imagine, this is insanely useful for endgame PvE content. But actually getting Divinity is another matter altogether…

If there’s one rocket launcher that you’ll hear lauded above all others, it’s Gjallarhorn. Gjallarhorn first appeared in Destiny 1, and it was with much fanfare that it came to Destiny 2. But to get it, you’ll need the Bungie 30th Anniversary Pack. Once you have that, you’ll be assigned a quest that sends you to the Grasp of Avarice dungeon, a dungeon which is now part of the weekly rotation.

Related: How to Find and Pet the Mechanical Dog in Destiny 2 Operation: Seraph’s Shield

If that sounds both expensive and tedious, well. You’re not wrong. But Gjallarhorn offers big dividends, if not in cash, then in sheer damage output. It has tracking missiles and two rockets in the magazine, assuming you have its Catalyst. And if your whole squad is rolling up to a boss with these launchers? Expect that boss to be a smoky stain on the floor in no time at all.

I may be exceedingly biased, but I love The Lament. If The Lament had hands, I would have put an engagement ring on it and asked it to marry me. I have lived and died by that sword, and so have countless others because it’s a fantastic S-Tier Power Weapon. You’ll need to complete the Exotic Quest in the Beyond Light campaign to get it. And it’s worth it. So worth it.

The Lament has remained so popular, even into 2023, because it’s capable of incredible damage if you use its chain attack, which can do an incredible amount of damage to any Raid or GM Nightfall boss you run into. Assuming you can get that close to them, of course. And the icing on the cake? It can also pop the bubbles of those pesky Barrier Champions.