Are the Raiden Shogun's Constellations Worth Getting in Genshin Impact? - Answered - Prima Games
Tips

Are the Raiden Shogun’s Constellations Worth Getting in Genshin Impact? – Answered

You should see her in a crown 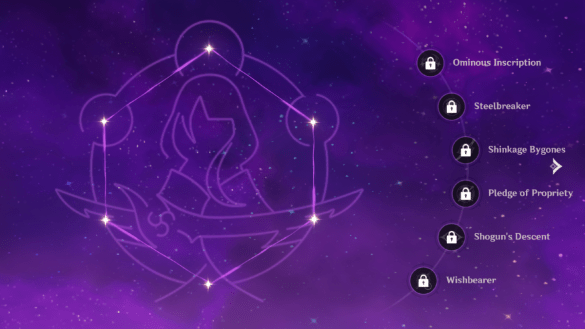 HoYoverse has loved to play favorites when it comes to Genshin Impact’s roster of characters, but is the Raiden Shogun one of them? Raiden is a pretty interesting character, both as an archon and as a unit in your party. She provides plenty of Energy Recharge just by being there but based on that very same Stat, can obliterate enemies within her path. Like Childe, she’s proven to have a unique play style but works as both a Support as well as an outrageous DPS. Do her Constellations give her justice?

If her Energy Recharge wasn’t insane enough, then her first constellation will be more than double that just by unlocking it at a set value. But the type of party members that you decide to include in her run also matters. Using characters of other Elemental Types Bursts’ will increase Raiden’s ability to generate particles and Energy for her team by 20 percent on top of the 80 percent she already gains from her constellation. Although this isn’t a great boost to her form as a DPS, it does wonders for her position as a Support.

Like a Nobushi bypassing armor, whenever Raiden is in the Musou Isshin state after unleashing her burst, Raiden’s attacks committed by her teaching will ignore 60 percent of Opponents’ Defense to land more critical hits on her enemies.

Related: How to Get End of the Line in Genshin Impact

Many early Inazuma characters have constellations that focus on breaking through the opponent’s defense rather than adding to their damage. While a fascinating prospect of their own story and place within the Genshin storyline, it does mean that using these units will work better on some types of enemies better than others. Especially those with high defense or a lot of HP. This could prove why Raiden does particularly well against bosses and larger enemies.

Raiden’s fourth constellation does a peculiar effect, but one that is greatly beneficial for herself and her party members. Shortly after her burst is used, Raiden needs time and the role of her party members to regain her energy. This constellation gives her team members a 30 bonus to their Attack for a duration of 10 seconds after her Burst has ended. This helps to boost the damage dealt by these characters and only further helps Raiden since each Burst will add a resolve for her to deal Damage and regain Energy Recharge for her party. It’s quite funny how the constellations only continue to work in tandem one after the other for Raiden’s to continue to operate in succession.

These constellations are dedicated to increasing a character’s Talent Branch Levels and often switch between including the character’s Burst or Skill at Constellation Three depending on which is considered to be most important to that character’s kit. Sure enough, to Raiden’s, her third constellation is dedicated to increasing her Elemental Burst by three. This can either increase it at whatever level it is at for you now, and it’ll just add three to your current Level, indicating it has done such by dedicating these numbers to blue. If it is crowned, it’ll max out at 13. Raiden’s fifth constellation increases her Elemental Skill, which is a mini-Musou that distributes Energy to her party and applies Electro damage every so often her party members or herself land a hit on the enemy.

Raiden’s last constellation applies to her Elemental Burst in that with every hit she lands in her Musou Isshin state, she will decrease her party members’ Burst Countdown by 1s. It can be triggered up to five times in succession in the Raiden’s current duration.

Altogether, it’s probably the first of the five-star characters that her constellations aren’t entirely worth spending the extra money or Primogems on. Raiden does have a unique role in the lineup by acting as Support and DPS, but her value in the constellations only seems to increase her role as Support and not as a DPS. The only increase to Damage could be Raiden’s second constellation, which you wouldn’t have to spend too many primos on or money if you dare dip into your wallet for her.

The only real value to her constellations would be her first two constellations and unlocking her talents. C3 would be the highest that I would ever ascend Raiden since it includes one fantastic Energy Recharge buff, a way to bypass Enemy’s Defense, and she would have three additional levels added to her Elemental Burst Talent Branch.

But I don’t decide what you spend your money or Primos on, so if you’d like to continue collecting her constellations, I wish you all the best!

What do you think? Are her later constellations truly worth the effort?