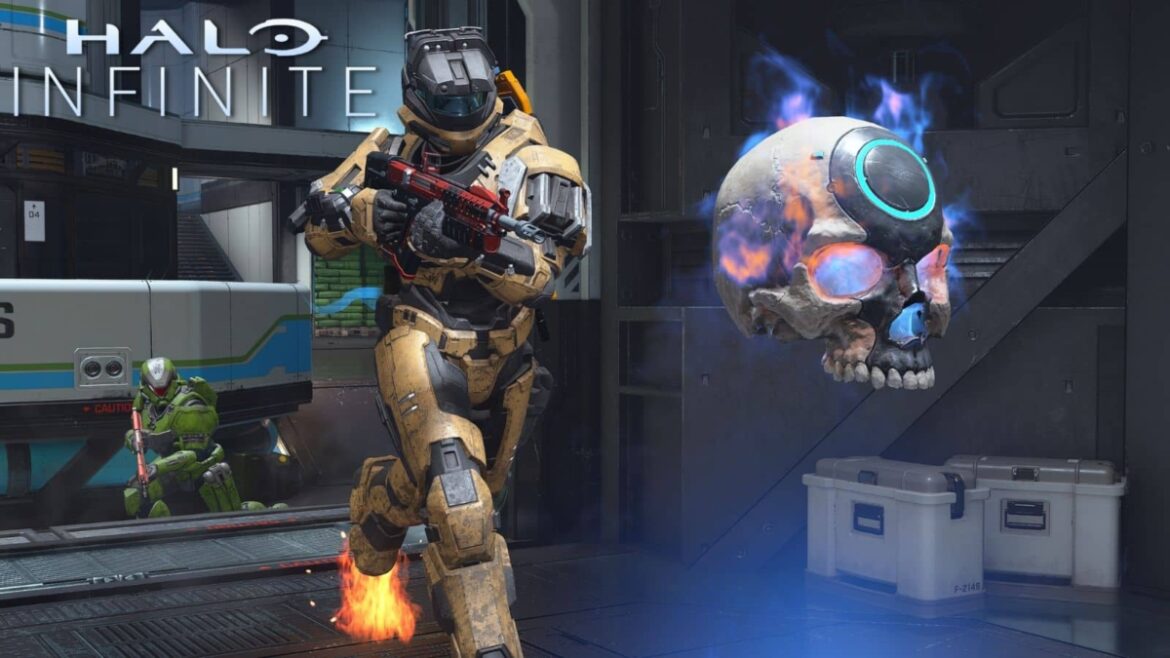 Skulls have long been a classic collectible item in the series and Halo Infinite hides 12 of them in the open world of Zeta Halo and during various missions. Here’s every Skull location in Halo Infinite and their effects.

The Boom Skull is the first Skull you will find, hidden in Mission 1, Warship Gbraakon. Once on the ship, use the lift to reach the glowing red hallway. Several Jackals await you, alongside a few other enemies in the next room, which also holds the Boom Skull. To find it, jump to the second level and look up and to the right. Press the D-pad to scan and then use the lift to reach it.

The Cowbell Skull can be obtained during the Foundation Mission. It is early in the game and rather easy to find. After discovering The Weapon, take the long elevator ride and pass the hallucinations in the room. Once you are at the next room’s entrance, use Scanner to locate the Skull, which is just above you.

Effect: When you equip Cowbell Skull, you will recover way faster from explosions.

This one can be obtained at any time while in the campaign.

It is in a tree trunk in the canyon not far from Outpost Terminus. Two Hunters guard the Skull and once you defeat them, you will be able to collect the Catch Skull.

Just like the Catch Skull, the Fog Skull can be collected whenever. However, it is best to wait until you have leveled up your Grappleshot. It can be found along the coastal cliffs southeast of the Foundation and just southwest of FOB Alpha.

While you can use upgraded Grappleshot to get the Skull, it is much easier with a flying vehicle like the Wasp.

Effect – If you don’t want to find out who or what lurks around, equip this skull to disable the player’s motion tracker.

I Would Have Been Your Daddy (IWHBYD)

This one was kept a secret until the game’s release. It was revealed to the players by YouTuber Mint Blitz, who showed off a Halo Infinite Craig easter egg. It can be obtained during Mission 4: The Tower.

Use the grapple to climb the tower and at the very top, you will find the IWHYBD Skull on a red chest.

The next Skull in the game is the Blind Skull. You will probably have a hard time collecting it.

First, you need to know that it is located in a large canyon that is spread across the open world from north to south and southwest.

Find the boulder that is in the canyon to the west. Scan for the Skull, which will also reveal a rocket launcher. The Blind Skull is in the depths of the canyon, so drop down and use Grappleshot to the ledge to get it.

Effect – HUD and Weapon names arent displayed on the screen.

This one is an easy scoop. It is located between Reformation and Graveyards, exactly where you were during the Pelican Down mission.

Use your Grappleshot on the highest peak in the area where you’ll find the Thunderstorm Skull atop the Forerunner column.

Effect – If you want to play on a harder difficulty then equip this skull. It will upgrade the rank and difficulty of enemies.

The Black Eye Skull is in a cave hidden by the waterfall halfway between FOB Juliet and Riven Gate Banished Outpost.

Time your Grapplehook right to navigate your way into the cave. Once in, a brief tunnel will lead you to the Black Eye Skull.

Effect – Shields will only recharge when using melee weapons.

East of the Zeta Halo map is a tiny little island that stores the Famine Skull. Use Wasp or Banshee to get there. It is at the peak of the island, in a dead Elite’s hand.

Effect: Weapons dropped by enemies only have half the ammo.

The Mythic Skull can be obtained in the Command Spire once you complete the Nexus mission. After fighting numerous enemies, look for giant hexagonal floating pillars. This is where it’s hiding.

This Skull is located in The Repository. While on The Repository mission, you will find a large open room with a bridge that leads to its center. After interacting with the central console, it will trigger a cutscene. Now, head back to the first platform and use Grappleshot to get across,

Collect the power seed at the end of the hallway and head back to the main room. Turn left and then use the Grappleshot to another platform. After going through the mission, you will go to three rooms – one of which has three enemies and the Grunt Party Skull.

Bandana Skull is found in the last mission, The Silent Auditorium. You will find it in one of the rooms when you pass the sentinels and cross two light bridges.